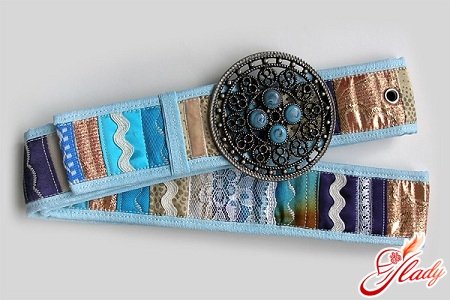 Crazy Patchwork is a rather strange name forscrappy technique. What does "crazy" mean? Crazy, crazy, insane. However, in this technique everything is done in the mind, though without observing the exact rules, proportions and geometry (unlike the traditional patchwork). By the way, the "Crazy" technique is a patchwork sewing in which not only free forms are assumed, but also additional decorative accessories are present in abundance. What kind of technique is it, how did it come about and what is its insanity? We learn in more detail.

The history of the "crazy shred"

Quilting as such appeared in England,from where it first safely migrated to the New World and gradually won fans around the world. It is believed that the Crazy Patchwork originated at the same time as the traditional patchwork, although the tasks were completely different. The usual patchwork was a way of economical use of expensive fabrics, that is, the ability to create quite practical and necessary products from its remnants. Crazy patchwork served for beauty. Maybe that's why he got his ambiguous name - those who spent expensive textiles for nothing, without gaining any benefit from it, were considered insane. But this is only an assumption. We go further, namely, from the West to the East. Quilted from European traditions, patchwork flourished in Japan. There, as you know, silk was also in price, and kimono made from it cost incredibly expensive, carefully preserved and passed on by inheritance. Japanese patchwork was both utilitarian and symbolic. So, for example, the garment donated to the iconic anniversary (77 or 88 years) was made from the same number of pieces. In short, modern patchwork in crazy technique combined Western and Oriental traditions and turned into a special kind of arts and crafts and in popular and fashionable needlework. Today, craftsmen use this technique for making exclusive clothes, accessories, interior textiles and, I must say, very much succeed in this. 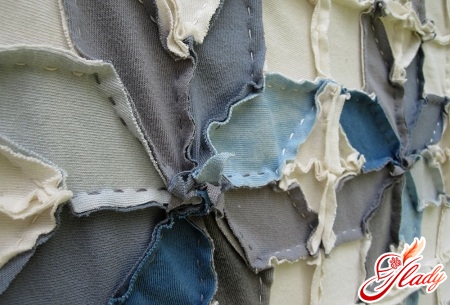 What is the "crazy" patchwork different fromOrdinary? As a rule, a product made in the traditional technique is considered almost ready, as soon as the shreds are added to the pattern and sewed together. Crazy pebble - sewing is special. Here the sewn up pieces do not mean the completion of work. On the contrary, the main stage of creativity is just beginning. And this method of patchwork sewing differs not only in an additional set of materials, but also in technique itself. So, for example, unlike the traditional patchwork in the technique of crazy, the main seams are masked with decorative (embroidered): goat, chain or goose paw. In addition, the decorative seams are necessarily combined with lace, which is considered an integral element of the patchwork craze, as well as with ribbons, braid, lace handmade jerseys, appliqués and decorative accessories: beads, beads, buttons. And for embellishment of products embroidery with ribbons is used, and this is a combination of two different types of needlework, as well as with masking of seams. As a result, patchwork is obtained not just bright and colorful, but also exquisitely elegant, sometimes bulky, surprisingly beautiful and, importantly, unique. This is the "madness" - in deviation from the rules, in the revelry of fantasy, in the unpredictability of the result. But, interestingly, an exclusive masterpiece is obtained from very prosaic materials and with the help of ordinary tailoring tools:

Most often the patchwork crazy-cloth is assembled onbasis - a single piece of cloth of a certain size, on which different flaps are sewn. In this case, the web is multilayered and volumetric. But often experienced masters and the very basis are cut and collected from individual large elements. And quite experienced scrapers are able to collect and sew all the patchwork of small pieces of irregular shapes. How can they do this? 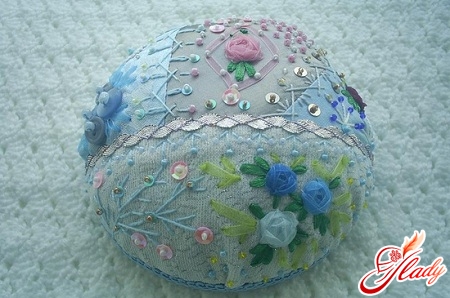 If you're just starting to learn crazypatchwork, then it is desirable to work with a base, with gaps of geometric shape (triangles, rhombuses, squares) and with tissues of equal density. In this case, the most "incorrect" flap is placed in the center of the base, fixed with pins and sewn around the edges. The next shred is applied to the first and is also sewn on (excess is trimmed with scissors). And thus all the patchwork cloth is collected, which is then decorated. If you dare to "encroach" on the technique used by experienced craftsmen, then you need to cut out the fabric in a special way. First, it is necessary to pick up contrasting fabrics and combine a monophonic material with a patterned one. Then you need to cut out the colored squares and fold them up two cuts face up: the underside of the upper workpiece lies on the face of the bottom piece. And then you draw on the upper cut two longitudinal waves (from the top edge to the bottom), which will divide the workpiece into three arbitrary shapes. Then you make lines on this contour, stitching both blanks (one lies on the other). Then, from the upper workpiece, cut out the middle figure, retreating from the seam a couple of millimeters. Turn over the sewn cuts and from the second workpiece cut out the two extreme figures, also having receded from the seams of two millimeters. As a result, you get a single-layer fabric of two fabrics and three flaps with uneven edges. The same thing you do with two blanks from other fabrics, sewing another patchwork cloth consisting of three figures. The seams are decorated with braid. The next step is applying one of the remaining flaps to the sewn canvas (and the workpiece, and the flap - face up, smooth edges are aligned) and tie it along the uneven edge. Turn over and from the wrong side cut off excess fabric, in place of which the "risen" attached patch. You also do the second painting. Alternately sewing this way different pieces of fabric, you get a single-layered craze-cloth, consisting of rags of arbitrary shape. Well, then decorate to your liking. And ready-made canvases can be used as blocks for sewing pillows or a large patchwork cover (although, in this case, the edges of such prefabricated cloths will have to be trimmed). Alternatively, you can make a pattern for your bag, for a cosmetic bag, for a cover on a book or even for clothes. This is exactly what you want and what you want. Just do not forget about the accuracy, the need to iron the seams and the sense of proportion, which is necessary even in crazy patchwork. I wish you success and good mood! We advise you to read:

Spirits with your own hands - show imagination!

Winter crafts for the kindergarten