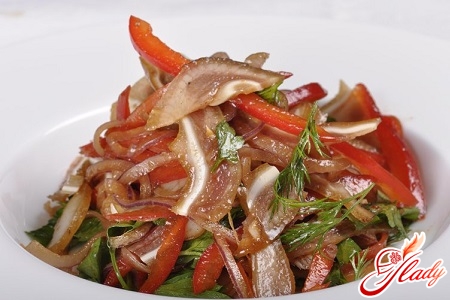 In Russia, few know how to cook porkears so that the dish not only was delicious, but also looked festive. Usually we use them only as one of the ingredients for the holland. In some countries of Europe and Asia, this product is treated with great respect. At them it is considered the present delicacy. For example, in France, pork ears are prepared only for holidays. They are first boiled, then baked, beautifully decorated and served to guests. In Asia, they are often marinated and eaten as snacks. However, in that, and in another case - this is a delicious dish, which is very popular with both household members and guests. Therefore, if there was a question on how to cook pork ears, you can safely use traditional European or Asian recipes.

Method of cooking pork ears: Before cooking, the ears are thoroughly washed with running water, special attention is paid to the ear opening. After that, put them in a saucepan, pour water, add salt and cook for about 2 hours on medium heat. While the ears are boiling, prepare the marinade. To do this, the bay leaves are crushed into crumbs and mixed with crushed garlic, vinegar, Korean carrot seasoning and vegetable oil. After a lapse of one and a half to two hours, the boiled pork ears are taken out of the broth, cooled a little and cut into thin straws. Add marinade, mix well and send to the refrigerator for a day. Serve a snack in a cold. 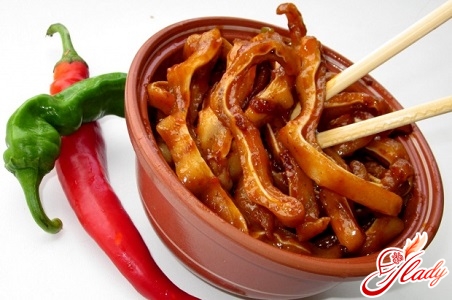 Cooking method: Pig ears are thoroughly washed and piled in a large saucepan. There also add the peeled root of parsley, celery and one whole onion. If desired, you can add a fragrant or black pepper. French chefs believe that how many spices do not stack - the ears will not get any worse. Next, pour the contents of the pan with cold water and set to cook on medium heat, for about 2 hours. Approximately half an hour before the broth is ready to salt to taste. When the ears are ready, they are taken out of the broth, cooled and cut into strips. The pan is smeared with butter and spread on it cut ears. On top, put onions cut into half rings. The sauce is prepared separately. To do this, warm the butter in the saucepan, add the flour, mix. When the flour is lightly fried and becomes golden shade, milk is added to the saucepan. The mixture is beaten with a whisk to avoid the appearance of lumps. Ready-made sauce is filled in the pan with ears and onions. Sprinkle with grated cheese on top of the grater. Bake the dish for 15-20 minutes at a temperature of 180 ° C. 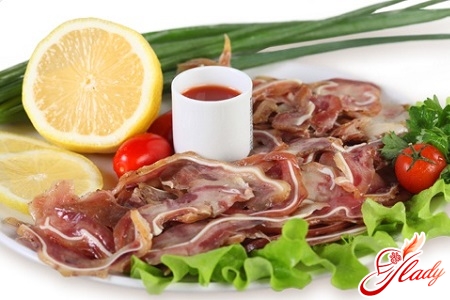 Cooking method: Pig ears are cleaned, thoroughly washed. Then they are put in a saucepan and poured in cold water. Add carrots cut into small pieces and a whole, uncleaned onion. Broth is brought to a boil, remove the foam. After add all the other ingredients and cook for 2.5 hours over low heat under the lid. Ready-made pork ears are taken from the broth, the fat part is cut off (if desired) and placed in rectangular-shaped vessels. Between the ears you can put a piece of carrot. Then add a little broth (about 1/4 of the container) to the soup and put the load in such a way that the ears are covered with liquid. In this form put in the refrigerator at night. When the snack stiffens, the load is removed. The soup with ears for a few seconds is lowered into hot water so that the contents can be easily laid out on a plate. Snack is served with soy sauce, grated garlic or horseradish.

Cooking method: Pig ears are boiled in water for about 1 hour. After they get out of the broth and allow to cool. The cooled ear is sprinkled with salt, spices and laid on a piece of foil, sprinkled with gelatin. On top put half the carrots and sprinkle with salt, spices, gelatin. Next is the turn of finely chopped greens, garlic. In the mince add the egg and spices, spread on garlic and sprinkle with gelatin. After the mince all layers are laid out in the reverse order, starting with garlic. Each layer is lightly sprinkled with gelatin. When all the ingredients are used, the top snack is covered with the second ear and tightly wrapped in several layers of foil. After this, also tightly wrapped in several layers of food film. Put in a pan with cold water and cook for about an hour and a half. After a lapse of time, the ears get out of the water and, without unfolding, put under the press. Cooled roll with a press put in the refrigerator for a couple of hours. When serving, the dish is cut and decorated with greens.

How to cook meatballs with rice in sauce?

How to Cook Chicken Tobacco in an oven