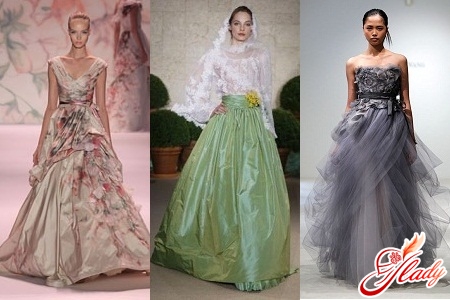 Wedding without too much modesty can be called the mosta significant moment in the life of absolutely any woman, in fact they are still imagining in their imagination knights on white horses and fabulous outfits in which they feel like queens and "first violins". Little girls grow up, and their dreams become stronger and become reality, and then the question arises: is it worth to stick to the traditional, canonized wedding ritual or to give up entirely to the realization of your dream of an ideal celebration. Pre-wedding bride fever is associated with such a delicate issue as the choice of ceremonial attire, and increasingly the eyes of modern brides are turned to colored wedding dresses. The concept of pompous, "white", classical weddings with the observance of all traditional rituals and canons is gradually replaced by the original ideas of the newlyweds, as well as their personal preferences, which are sometimes capable of shocking. Modern young, bright brides want to make notes of creativity and make a bet on originality, determining the style and style of their attire, so they set the goal as far as possible to distance themselves from the stiffness and chastity of the wedding white dress, the benefit of a wide range makes it easy to translate these dreams into reality . Initially, attempts to change the idea of ​​the beauty of the wedding dress were timid and concerned only innovations in small accents, and here the designers gave life to wedding dresses with colored inserts that literally made a furor in the world of wedding fashion and forced to look at the wedding ceremony from a different angle. Such elements brought a pleasant revival and set the tone all along, it could be a colorful bright belt or a different bodice in the color scheme, often a corsage that included a game of color and was ennobled, for example, with gold trim, it was not uncommon for that period to have contrasting bows or loops. But the current fashion catalogs are placed on the pages of not only models with individual inserts and their photos, short wedding color dresses - even this refinement is no longer a novelty for them. Gradually, the wedding fashion industry began to offer outrageous, eclectic options for dresses aimed at bold individuals, for example, blue, pink tones, sand and pastel shades, as well as "champagne" colors. Now you can find even a print of black color, as well as Bordeaux, a special trend is colored embroidery and embroidered from a decorative, colorful thread. 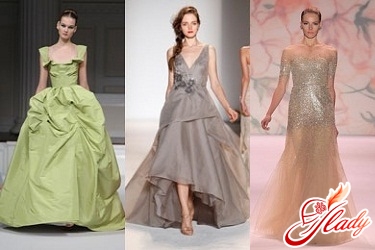 It is important to note that for the bright, original,a memorable appearance must be paid, so wedding dresses 2016 colored or with separate bright patches should be chosen taking into account the smallest nuances, because the color itself imposes additional restrictions. Therefore, brave brides who liked the color version of the attire, it is important to consider the most basic and general recommendations for choosing a colorful wedding dress. Undoubtedly, the wedding fashion industry includesa collection of more traditional, elegant and chaste options for wedding dresses, the bulk of which is made in a snow-white range, but many designers prefer innovation and create masterpieces that can provoke a revolution in the notions of a classical wedding. One of the last collections, which was approved by fashion critics, was a show from Alexis Mariage, which was built on lavender lush, multilayered models, if the brides are guided by romantic, gentle images, then the collection of this couturier is an ideal option. Many fashionable women's magazines place on their pages photos of short wedding colored dresses, such outfits are abundantly found on the carpet tracks in the Marchesa Bridal collection, as well as the world-famous Vera Wang are youth styles designed for stylish, brave brides. Vera Wang has earned worldwide popularity thanks to its flowing color models in Empire style, traditionally they were framed by a dark belt or were embroidered with a black print. Those brides who prefer color models, but do not decide on the style of the outfit, simply have to look at the chic line from the designer Carolina Herrera, she provided a rich assortment of wedding dresses, for example, curvy, A-silhouettes or models with short skirts. Multilayered styles differed in rich color scheme: they evoked red, warm yellow tones, but the A-silhouette was made in pastel, matte colors, magazines about wedding fashion quickly picked up the trend of color wedding dresses, the photos with the models of this show made a furor and were the subject of controversy among critics. Most eminent couturiers prefer to set bright accents in the attire for the bride, rather than paint everything, so to speak, the canvas. For example, Sacha Novia made a revival in classical attire, highlighting a fiery red bodice, while Marchesa Bridal bets on textile bows and ribbons, Jenua Beaute played on contrasting lace and multi-colored beads, giving these small, elegant elements a general tone to the whole image of the bride. In the catalogs of the wedding fashion, the models of extravagant color wedding dresses were abundantly placed in 2016, the photos eloquently said that an alternative to the traditional white one was found. The modern bride is not obligated to subordinate herself to strict canons and traditional, classical rules of wedding ritual; on the contrary, everything in the bride's hands is concentrated that can emphasize her vivid individuality, but she should not go against the solemn and pompous way with which the outfit of the future wife . The fashion industry makes it possible to embody any, even the most daring dream, which as a child warmed the heart, and now can easily become a reality. And if a girl sees herself as a queen solely in a colored wedding dress, then it is worth simply succumbing to this temptation and buying it, since the fashion designers took care of such products to occupy a worthy niche in the world of wedding fashion. We advise you to read:

15 years of wedding, how to celebrate and what to give?

Wedding signs. What are they talking about?

Civil marriage: the pros and cons in the representation of modern society

How to return the love of the husband: the best tactic of the behavior of a loving woman