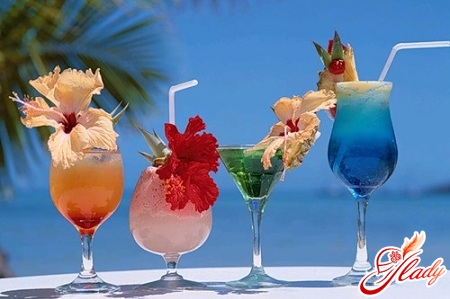 Cocktail is a wonderful refreshing drink,consisting of a mixture of one or more alcoholic drinks with different fillers (syrup, milk, honey, etc.). The cocktail has always been considered a feminine drink, and it's not at all in his fortress. Have you ever heard the phrase "skip a cocktail party" in a strictly male company? Hardly, because cocktails with liquor, champagne, strawberries and wonderful whipped cream have always been purely female prerogative. Well, who among us in his right mind and solid memory will refuse an evening cocktail with liquor, especially if it is served in a romantic atmosphere?

Cocktail with liquor: history of origin

Perhaps the most popular ingredient forthe cocktail was and remains liquor. This is not surprising: it is hardly possible to imagine at least one alcoholic beverage, which has the same great variety of consistencies, colors and flavors. It's hard to say when there were recipes for cocktails with liquor, but the first official document in history to testify about the appearance of the liqueur itself dates back to 1575 - it was invented by a Dutch physician. Recipes of such famous liquors as "Curacao", "Galliano", "Cointreau", "Grand Marnier", "Benedict" were invented in the nineteenth century, and are still successfully used for making alcoholic cocktails. The same cocktails appeared about two hundred years ago. Already in 1862 the first book devoted to the recipes for preparing cocktails was published. To name the inventor of this drink, alas, it is impossible, because mix a couple of drinks and serve to the table - it's a simple matter. But a truly popular love cocktail was received in America, during the Dry Law. Alcohol was then banned, but the taverns continued to exist, albeit underground. It was in these secret drinking establishments that the master bartenders came up with a way to hide the taste of strong drinks, mixing them with lemonade and juice. The dry law was canceled, and the bartenders continued to sharpen the mastery of making a cocktail - a drink so loved by the people. No less interesting is the origin of the word "cocktail": do not believe it, but linguists offer a dozen versions of the appearance of this word. By the most popular of them, the cocktail is "Cock 'Tail", the cock's tail. The essence of the story is that an American, the owner of a tavern, was an ardent admirer of cockfighting. Once his precious bird disappeared, and one young lieutenant (it was during the War of Independence) found the cock and returned it to the owner in safety and integrity. For joy, the lucky owner decided to give the lieutenant a single daughter, and immediately made her prepare the best husband for her future refreshing drink. The girl did not get confused and mixed Kentucky whiskey, homemade wine and bitter tincture. Guests with pleasure drank a new drink, raising toasts for "Cock 'Tail" - the cock tail, from which not a single feather fell. 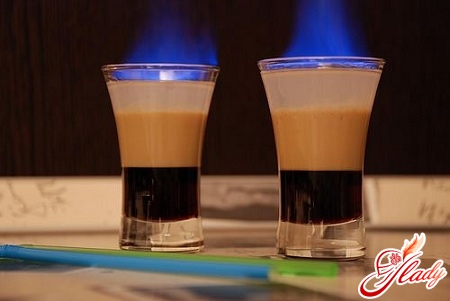 Recipes of cocktails with liqueur

In our time, there are so many cocktails with liquor thattheir description could be devoted to a whole book. We will not talk about the types of cocktails and their classification, but simply give you the exact recipes of drinks that you can prepare at home. Cocktail "Kiss of an angel" The name of this cocktail with a liqueur speaks for itself: after sipping it, you will feel the tenderness of the cream and the real heat of the liquor that drives you crazy.

Pour a liqueur into the glass and add the spoonwhipped cream. Drink a liqueur cocktail in a gulp. Cocktail "Grasshopper" Its name was given to this cocktail due to the fact that one of its ingredients is a liqueur of green color. This drink was so popular that an anecdote was dedicated to him. Grasshopper went into the restaurant and jumped on the bar, and the bartender said to him:

Beat the liqueurs and cream in a shaker filled withhalf ice. Strain into a glass. Cocktail "Monica Lewinsky's Dress" A cocktail with such an original name was very popular a few years ago, when the history of relations between Bill Clinton and his secretary thundered all over the world. You can quite surprise and cheer your friends by remembering this piquant case and offering a little cocktail with a liqueur.

Beat the liqueur with champagne, pour overglasses. In each glass add a few drops of cream. Cocktail "B-52" There are several versions of the appearance of the name of this cocktail, but the most popular is the following: the drink appeared about the same time as the B-52 "Stratofortress" bomber appeared. Moreover, these cocktails with liquor in ready-made form very much resemble a reduced copy of the nuclear bomb, which the plane was transporting. This drink - for extreme, because it is used before burning. In order not to get burned, drink this cocktail through a tube, starting with the bottom layer.

The liqueur is poured into a glass of Kaloua. Then Bailey slowly and very watchfully added (it is best to pour it on the back of the tablespoon). Similarly, add Cointreau. Set fire to the top layer. As you can see, making cocktails with liquor is not difficult, because all the recipes are very simple. It is important to strictly observe the proportions and use beautiful, spectacular glasses. Well-prepared cocktails are valuable as well as good wine: giving their fine taste and aroma, they give the body peace of mind, and thoughts - lightness.

How to make kvass?