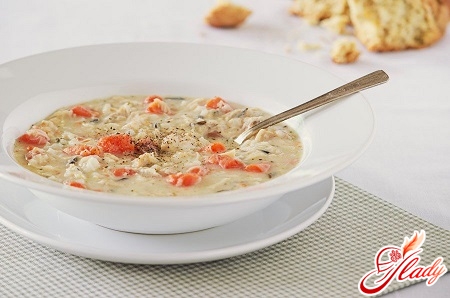 Chicken soup with rice is not a national recipe. But the dish is the best match for our culinary traditions: a rich, but light broth, seasoned with croup and vegetables. By the way, rice chicken soup can be cooked very differently. And we offer you is not the only recipe for this wonderful first course. And which recipe to choose is your business. After all, about tastes, as is known do not argue. So, choose ...

Chicken soup with rice and tomatoes

The recipe is quite simple, although unusual. But the soup turns out, first, dietary, and secondly, it is great for the children's menu. Ingredients:

Preparation: The recipe is designed for a two-liter soup pan. To begin with, pieces of chicken (meat with bones) are properly made for mine, put into a saucepan and pour cold water. We put the pan with the chicken on the stove, and when the water boils, remove the foam, reduce the heat and cook until the chicken is ready. After that we take out the chicken, filter the broth and put it on the fire again. While the broth is boiling, wash and clean the vegetables. Bulb we put in broth whole, and potatoes, carrots and celery we grind: potatoes we cut cubes, and a celery with carrots straws. After the vegetables, rice should be put into the soup, which must first be washed. Continue cooking soup until the rice is not ready. Then we wash the whole tomatoes in a pan with soup for literally 1 minute and take them out. Together with tomatoes, we take out an onion - it will not be needed any more, so it can be discarded. Now with tomatoes you can easily peel, which we will do, and then cut the peeled tomatoes in small pieces. We fill the soup with tomatoes, put the bay leaf and cook our chicken soup until the rice is ready. At the very end, we add salt, chicken meat without bones and washed and chopped greens to taste. We wait for boiling, turn off the fire, cover the pan with a lid and let the soup brew for 10-15 minutes. That's all! Now you can start eating. 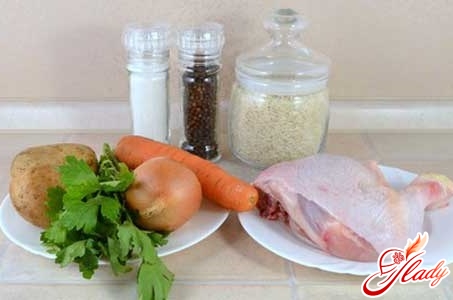 This recipe also fits perfectly with ournational culinary traditions, because green oxalic soup has always been in our esteem. So why not cook them from a chicken, having seasoned the soup with rice? Shall we try? Ingredients:

Preparation: Chicken fillet cut into small pieces. In the frying pan pour the vegetable oil, let it burn and fry the meat until light crust. To make the chicken juicy, put pieces of meat in small portions and in no case salt it. While the chicken is being fried, wash and chop onions and carrots and cut them: onion shred, carrots cut with straw. Add the chopped vegetables in a frying pan with chicken and continue to fry all together for another 5 minutes. 5. When the roast is ready, take a three-liter pot, pour boiling water into it (one and a half liters) and put it on the fire. Once the water boils again, put the frying pan and the washed rice into the pan. Cook the soup over low heat. In the meantime, mine and peel potatoes, cut it into cubes and send it to the soup. Next, we put the bay leaf and continue to cook until the potatoes and rice are ready. During this time, we need to sort out the sorrel, remove the stems from the leaves, and carefully wash the leaves and cut them. When rice and potatoes become soft, fill the soup with sorrel, add salt, washed and chopped herbs and bring to a boil. Now turn off the soup, cover the pan with a lid and leave to infuse for 10-15 minutes. When serving, we put in each plate a half of the hard-boiled egg and add the sour cream to the soup. Note: Sorrel should be placed in the soup in the last place - only after the potatoes are ready. If you do this before, then the oxalic acid will make the potatoes hard and tasteless. 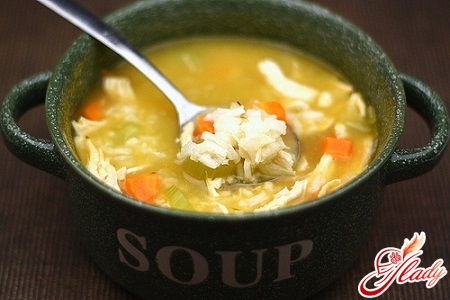 We offer you a recipe for a rice soup with tender chicken meatballs. Very tasty soup! Try it! Ingredients:

Preparation: First we make meatballs for meatballs. To do this, mix the chicken minced meat and grated melted cheese, semolina and raw egg. Add salt, black ground pepper and mix everything thoroughly. Pour the water into a two-liter pot and put it on the fire. While the water boils, we clean and my vegetables, carrots and celery cut with thin cubes, and finely chop the onions. Pour the vegetable oil into the frying pan and fry the roots until they are browned. Then we send the roast in a saucepan with boiling water, add the washed rice, laurel, black pepper and salt (to your taste). When the rice is almost cooked, we form minced meatballs and put them into a boiling soup, which we then continue to boil for a further 10 minutes. We serve soup with fresh herbs. 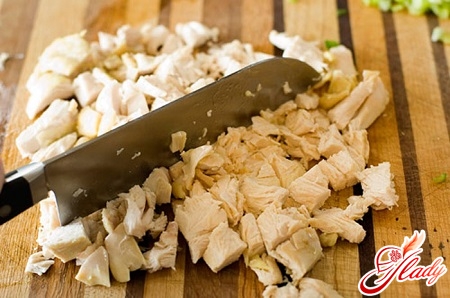 This recipe is noteworthy in that we cook soup with cream. And this will give him not only a special delicate taste, but will make the dish attractive for children. Ingredients:

Preparation: Half a chicken carcass thoroughly rinsed, put in a saucepan and poured cold water. Cook the broth over low heat in a saucepan with an open lid. Do not forget to periodically remove the scum, and when the chicken is cooked, remove it, and broth filter. We remove the meat from the bones and chop the pieces, after which we return it to the broth. We put the soup on the fire, and when the soup boils, fill it with washed rice. Peeled carrots, onions and celery, and finely shred, then fry the vegetable mixture on the hot vegetable oil until browned. We put the fry in the soup, salt it to taste and continue to cook on low heat. When the rice is ready, fill our chicken soup with rice whipped with a mixture of cream and chicken yolk. We give soup to boil and immediately turn it off, otherwise the yolk will curl up and float in the broth with flakes. Lastly, add the juice of half a lemon, bay leaf and chopped greens. Leave the soup to insist for 15 minutes and proceed to the meal. Note: To prepare the frying, you need to take only refined vegetable oil without taste and smell. By the way, if you make a frying on vegetable oil with cream, then the soup will get even tastier. We offer you a recipe for a very tasty soup on chicken broth with rice and cheese quenelle. Ingredients:

Preparation: First, boil the chicken, putting the washed carcass in a saucepan with cold water. When the chicken is cooked, take it out, remove the meat from the bones and cut it into slices, and filter the broth. We refill the broth with chunks of chicken, salt it to your taste and put it on the fire. While the soup boils, clean and my vegetables. Potatoes cut into cubes, carrots grind with a large grater, and finely chop the onions. When the soup boils, we fill it with potatoes, and after repeated boiling we put the washed rice. We leave the soup to boil, and in the meantime we make carrot-onion roast. To do this, pour the vegetable oil into a frying pan, let it hot and fry the vegetables until browned. In the soup with rice, cooked until incomplete preparedness, we lay vegetable fry and continue to cook it until the softness of rice. For the knels we grind the cheese on a grater and mix it with a raw egg and breadcrumbs. From the cheese dough we make small balls and lower them into boiling soup. We give our creation to cook on a slow fire for another 3 minutes, fill the soup with chopped greens and a laurel and turn it off. That's all! An unusual chicken soup with cheese knels is ready! That's how you can cook soup with chicken and rice in different ways: on cream, with tomatoes, with meatballs or even with cheese knels. So choose a recipe and cook. And remember that the taste of the dish depends largely on the mood of the chef. So cook with pleasure. Enjoy your appetite and success in the culinary field!