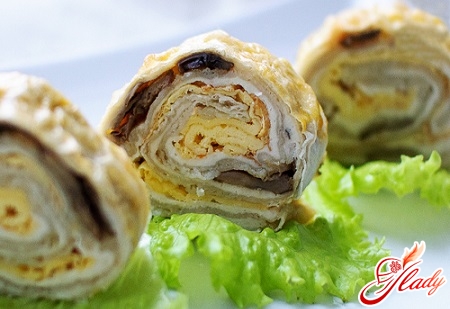 You know how to prepare cold snacks hotway? If not, then it's time to learn this. And if you know how, then take in your culinary treasury a wonderful recipe for one of these snacks. After all, we will learn how to make a chicken roll with an omelette. This dish is very popular, and the recipe for its preparation is not known to everyone. Rolls are not just delicious and satisfying, but also very beautiful. Of course, this dish can not be called very simple, and it takes a little time to prepare it. But it's never too late to learn, and it's not too early for anyone. But, only once making a juicy chicken roll with a delicate filling of omelets, you will forever remember his simple recipe and a special cooking technology. And then you will do it just once or twice! So, let's begin.

Roll of chicken and omelette

To begin with, we will learn the simplest recipe of this dish with a minimum set of ingredients. And we will cook it from a whole chicken fillet. Ingredients:

Preparation: First you need to remove the fillets from the chicken. Business requires a certain skill and accuracy. So, put the carcass on the cutting board with the back up. Now in the center of the carcass we make a deep longitudinal incision, starting from the neck. Next, using a sharp and thin knife, we begin to carefully cut the meat, separating the fillets from the bones on the back. Gradually move to the ribs, remove the meat from them, and then also gradually separate the fillets from the keel bones. It is convenient to take meat in turns, from the left and right parts of the carcass. As a result, we need to free the whole skeleton from the meat, and then take it out. Now you need to remove the meat from the legs and wings. To do this, we cut the tendons and remove the fillet with a stocking from the bones of the wings and legs. With this procedure, the most important thing is not to damage the skin, as it will become the basis of the roll. The resulting whole piece of fillet is laid out on the cutting board with the sandpaper down, lightly mash it and rub it with a mixture of salt, pepper and curry. We leave the fillet marinated, and in the meantime we prepare the filling. Eggs are divided into yolks and proteins and whisk them separately. Now combine whipped yolks with proteins and add milk mixed with flour. Beat once again the mass to homogeneity and put to taste black pepper and salt. Frying pan fry oil, put on the fire and let it warm up. Then pour the egg-milk mixture into it, mix it immediately and cover the pan with a lid. In a few minutes our magnificent omelet for the filling will be ready. After that, we take the omelet from the pan with a whole pancake and put it in chicken meat. We begin to roll the roll along the body, grabbing the meat from one of the sides of the chicken. Roll the rolled roll tightly with several layers of food foil and fix the edges. We put the wrapped roll into a long form (a cupcake, for example) for baking. Fill the form with water, add a couple of leaves of laurel, a little salt and garlic. The oven is heated to a temperature of 180-200 degrees and we send it a form with chicken roll. We bake roll about one and a half hours. We remove the finished roll from the oven and leave it to cool right in the mold, without unrolling it. Then we still remove the wrapped roll for several hours in the refrigerator. But when he gets a good cooling, remove the foil, cut the roll and put it on the dish. Serve with greens. A more complicated recipe, although the cooking technology is not complicated. Ingredients:

Preparation: First we separate the meat from the bones, keeping the fillets and skin whole. Try this time to start with the chicken breast. Cut it along the keel, and then gently prune the meat on the bones and separate the skeleton. Now prepare the marinade to your liking. You can, for example, mix adzhika, sour cream, salt and curry. You can use mayonnaise with mustard or with garlic. In short, how sharp and spicy you want to get a ready-made roll, so freely you can experiment with spices. Spread on the table fillets abundantly grease the marinade and leave for a while, during which we prepare the filling. Mushrooms, cut into small pieces and fry in cream or vegetable oil. We throw them in a colander, so that they cool down and give all the excess oil. We make an omelet out of eggs and milk. To do this, beat the eggs with salt and milk and fry the omelette on a preheated, oiled and covered frying pan. When the finished omelet will cool, put it on the chicken fillet - in the center and across the carcass. We put mushrooms on an omelette. They have a not very wide strip along the length of the future roll. Now wrap the edges of the fillet with the skin to the center and sew them. In general, it should turn out a patty of chicken meat and stuffing from omelets and mushrooms. We cover the pan with oil and put the roll on it with the seam down. We cover it with mayonnaise or sour cream and put it in a preheated oven to 200 degrees. We bake the roll for about an hour. We remove the finished roll from the oven, leave it on a baking sheet, and on top put the cutting board on which we load the cargo (a pan with water, for example). We leave the roll under the oppression of an hour for four, and even better at night. We serve, cutting it into thin circles, spread out on a platter and sprinkled with herbs. 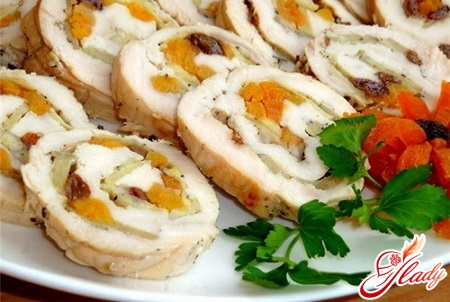 Chicken roll with omelets and greens

Another original recipe for a very delicate and delicious chicken roll. This time we will cook it out of minced meat. Ingredients:

Preparation: From two eggs, whipped with mayonnaise, salt and spices, fry the usual omelet and leave it to cool. In the meantime, we make minced meat for a roll. Carrots mine and clean, with onions and garlic, we take off the husks. Chicken meat is twisted in a meat grinder twice. Then we pass through the meat grinder a fresh carrot and onion with garlic. Put them in chicken mince, add raw egg, salt, black pepper and mix well. Washed and dried greens finely chopped. Stuffing is laid out on the table covered with food film in the form of an oval pancake. The second layer is laid out chopped herbs, and on it we put an omelette cake. Raising the edges of the film, we begin to carefully fold the roll. Without removing the film completely, we roll the sausage from minced meat several times on the table, so that the roll is compacted. Now we cover the baking sheet with foil, shift the rolls onto it and remove the food film. Roll the roulette with foil and send the baking sheet to the oven heated to 200 degrees for half an hour. Then take out the baking tray, unfold the foil and lubricate the roll with a raw yolk. Again, put it in the oven, do not wrap the foil, and bake for another ten minutes. Cool our roll directly on the baking sheet, and then serve it to the table, slicing and spreading on a platter.

Roll of chicken and omelette with gelatin

A very interesting recipe for chicken roll with gelatin. Ingredients:

Preparation: We remove the meat from the bones, lightly beat it, rub it with salt and leave to infuse. Of the two eggs mixed with mayonnaise, salt, spices and chopped herbs, fry an omelet. We prepare it on oiled and covered with a frying pan, and then leave to cool. Chicken fillet lay out on a table covered with food film, forming a small layer. Now densely sprinkle it with dry gelatin and cover with a completely cooled omelet. We turn all together into a tight roll, lifting food film. Speaking for the edges of the meat layer, the omelet pancake is cut off. We remove the film, and wrapped the sausage tightly wrapped with a stiff string and fasten it tight. We put this sausage in a bag for baking. We put a pot of water on the fire and let the water boil. In boiling water we lower the knotted bag with chicken sausage so that the edges of the bag remain above the water. They can be wrapped on the edge of the pot and pressed with a lid. After half an hour we remove the bag from the pan and extract the roll from it. Cool it, and then put it in the refrigerator to freeze gelatin. Leave in the cold for at least two hours, and then remove the thread and cut the roll into portions. That's how you can cook a chicken roll with an omelette in different ways. You just have to choose your favorite recipe and get down to business. You will certainly get to cook a delicious chicken roll with an omelette, of course, provided that you will cook with pleasure. Do not be afraid to try and learn new recipes. Enjoy your appetite and success in the culinary field!

Potato casserole with mushrooms: become the queen of the kitchen!

Baked potato with chicken: an appetizing dish, favorite by all

Dishes for a buffet table: recipes

Dishes from green tomatoes: recipes, blanks for the winter