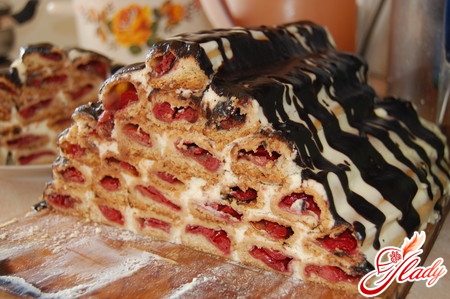 Many of us are familiar with the notion of "tastechildhood ". So the cake "Cherry Hill" is born from childhood. His recipe was very popular in homemade cooking of Soviet and early post-Soviet times. The recipe is actually quite common today, and you can cook this cake from a variety of doughs.

"Cherry Hill" made of honey dough

The recipe for honey is also very popular inhome cooking. From it prepare gingerbread and cookies, and also every possible cakes. For example, a recipe for honey cake has in its notebook every self-respecting hostess. However, from this test, you can prepare a cake with a cherry. Ingredients:

Preparation: Eggs break into a bowl and grind with sugar white. Add the liquid honey to the mixture, vinegar, dried soda and mix everything well. Now sprinkle the sifted flour, kneading a fairly steep, but soft dough, which is divided into fifteen identical parts. From each resulting piece of dough on the flour-poured table we roll out a small cake. We lay on a carat cakes of cherries (in a row!) And roll it into a roll. The edges of the roll should be closed so that the juice from the cherry does not flow out when baking. In the same way we roll rolls from other cakes. As a result, we should have fifteen tubes with a cherry filling. Spread the tubes on a greased baking sheet and send it to the oven, heated to 200 degrees. We bake rolls for thirty minutes. In the meantime, we are preparing a cream for the cake. Chilled sour cream is mixed with egg white and sugar is added, and then the resulting mass is thoroughly mixed and beaten with a mixer. After that, we install a container with cream on a water bath and, stirring constantly, warm up until the mass increases in volume by one and a half times. Then remove the cream from the water bath and cool it. We remove the finished tubes from the oven and carefully remove it from the pan. When the cherry rolls cool down a little, we begin to collect the cake. Take the dish and lay out a row of five tubes so that the rolls touch the long sides. Fill them with sour cream and sprinkle with chopped nuts. From above put a row of four rolls, which are also filled with cream and sprinkled with nuts. The third row - three tubes, cream and nuts. The fourth row - two tubes, cream and nuts. We crown our cake with the only remaining tube and fill it with sour cream. Sprinkle the cake with chocolate chips and leave it soaked for several hours. That's all - our cake "Cherry Hill" is ready! We cool it and serve it to the table. The recipe is quite simple, but the result is unexpectedly effective. Especially original this cake looks in a cut. 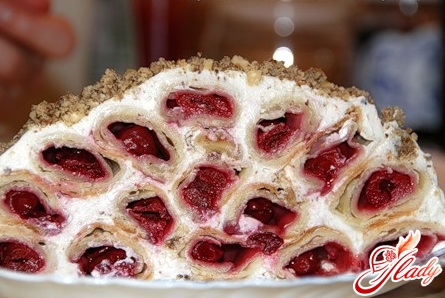 For this variant of "Cherry Hill" we use the recipe for sour cream dough. By the way, this recipe can also be used for making puff cake "Napoleon". Ingredients:

Preparation: Chilled butter or margarine put in a bowl, add sour cream, salt and sifted flour. Now with a conventional knife or culinary ax we cut all the ingredients into a crumb, and then start kneading the dough with your hands. As a result, a sufficiently soft and dense dough should be obtained, which must be removed to the refrigerator for two hours. While the dough is cooling, spread the cherry in a colander and pour it over with sugar. We leave the cherry in a colander, so that all extra juice is stacked from it. After two hours we take the dough from the refrigerator and divide it into three parts. Each part of the dough is rolled into a square cake with sides measuring approximately twenty-five centimeters. Each pancake is cut into five strips. We take one strip, spread it along the length of the cherry and patch the edges of the dough to get a closed tube. Thus we prepare the tubes from the whole dough. They should be fifteen. Now we spread all the tubes on the baking sheet, sprinkled with flour, and send it to the oven, which we preheat to 180-200 degrees. Bake the tubes to a golden color, and then remove from the oven and cool. While the tubes cool, make a cream for the cake. Whisk the sour cream with sugar and vanilla sugar until the mixture thickens. But now you can collect the cake. The principle is the same - we lay the pipes in rows, forming a slide from them. The first row consists of five tubes filled with cream. The second row - four tubes and cream. There are three more tubes and cream on top. Then we put two tubes, we pour a cream, and from top we stack last and we fill in with a cream all cake. Sprinkle our cake with stranded chocolate and leave to impregnate. Then the cake is cooled and the sample is taken. 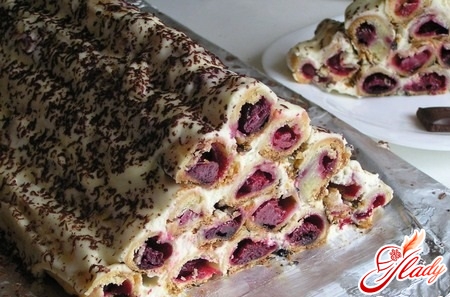 "Cherry Hill" made from biscuit

We offer you a recipe for a simplified version of Cherry Hill. This recipe will save you time and make a delicious and juicy cake with a cherry. Ingredients:

Preparation: First you need to make a dough. For this, we break the eggs into a bowl, add sour cream and sugar, and then mix and lightly beat the mass with a mixer. Next, put the unburned soda, mix and add cocoa powder and sifted flour. Mix the biscuit dough of the density of sour cream. Turn the oven on and warm it to 180-200 degrees. While the oven warms up, grease the baking dish with vegetable oil and sprinkle with flour. Important! It is necessary to take a not very wide form - a diameter of not more than twenty centimeters. Otherwise, the finished cake will turn out to be flat. If you bake a cake in large form, then you just need to increase the amount of ingredients for the dough and, accordingly, for the cream. We send the form to the oven and bake the cake for half an hour (plus or minus five minutes). Ready to test the sample on a dry toothpick. We remove the finished cake from the oven, cool it a bit and remove it from the mold. When the biscuit completely cools, cut it into three cakes. From sour cream, sugar and vanilla sugar, we prepare the cream, simply mixing sour cream with sugar and whipping it with a mixer. We're collecting the cake. We put one cake on a dish, cover it with the third part of the cream and spread a few cherries on it. We put the second cake on top and also lubricate it with cream. The third cake is cut into cubes and mixed with the remaining cream and cherries. The resulting mass is laid out on top of the cake, forming a slide. Sprinkle the cake with washed and dried raisins and chopped nuts (walnuts, hazelnuts, peanuts or any others). Top with melted chocolate. This recipe is also good because the cake does not need to be soaked for a long time - just fifteen minutes! After that our "Cherry Hill" is completely ready - you can serve the cake on the table. By the way, for the cake "Cherry Hill" in the traditional version, you can use almost any sweet dough, from which you can bake strawberries with a cherry. So do not be afraid to experiment. Perhaps, you can invent your own recipe for the Cherry Hill cake. The main thing is to cook with pleasure. enjoy your appetite and success in the culinary field!

Wafers in a waffle-maker: a recipe for dessert for every day

Cake an anthill of cookies: a recipe for cooking

Cake Napoleon: the best options for your favorite dessert

Napoleon curd: the new look of the famous cake