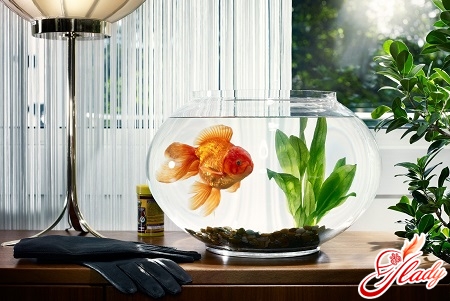 Do you want to have a real goldfish at home? Imagine, this is possible not only in a fairy tale. No, we will not give you any guarantees for the fulfillment of three wishes ... But there is as much advice as to how to properly care for the goldfish living in your aquarium! It is easy to care for goldfish, and their maintenance does not cause any special trouble. What, in fact, are these fabulous goldfish? What should be the correct content of goldfish, how to feed them and do they need some special care? Let's figure it out.

Aquarium fish, known to us as gold,are officially called Carassius auratus auratus (in Latin) and belong to the Cyprinidae family (Cyprinidae). The nearest relatives of goldfish in our rivers and lakes are mirror carps, crucian carp, breams, ruddles and stickers. But to which family the Pushkin Goldfish belonged, it is difficult to say, because these fish are mostly freshwater. In a home aquarium, goldfish, as a rule, do not grow longer than fifteen centimeters, although they can reach a length of thirty centimeters. They have an oblong elongated body flattened laterally with a sharp snout (muzzle). The long upper (dorsal) fin begins in the middle of the body, and the short lower (anal) is located closer to the tail. The classical coloring of the goldfish is red-golden on the back, yellow-golden on the sides and yellowish on the abdomen. Fins are painted in a bright red color or any reddish shades, they are less often just yellow. However, there are instances of just exotic colors, ranging from black and blue to white. So the goldfish may not be golden at all, but red, pink, brown or even spotty. Determine the sex of the goldfish is possible only in the pre-spawning period. At this time, males, ready for spawning, acquire a distinctive feature - notches located on the anterior ray of the first pectoral fins and on the gills. The female, ready to lay calf, is easy to recognize on the compressed inflated abdomen. If you look at the fish from above during this period, you can notice the curvature of the body, which often remains after laying eggs. 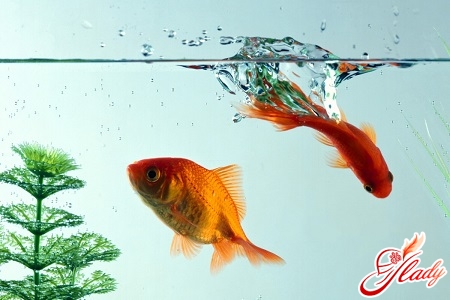 An aquarium with goldfish shouldTo meet comfortable conditions for them. It is advisable to purchase a special species aquarium with a length of one meter. At the bottom of the aquarium it is necessary to pour a coarse-grained soil and plant a small amount of aquatic plants. In accordance with the conditions of goldfish, it should be plants with not very small leaves, such as a egg-box or vallisneria. It is good to settle in the aquarium and floating plants, which serve goldfish as food. From floating plants, duckweed and riccia are the most suitable. Comfortable conditions of maintenance are water, the temperature of which varies from 16 to 24 degrees. And in winter the temperature of the water should not exceed 20 degrees, and in the summer it should drop below 21. It is necessary to gradually reduce or increase the seasonal water temperature. Proper care for goldfish is also the maintenance of a balance of water hardness and acidity in the aquarium. Water hardness (dH) for goldfish can range from eight to eighteen units, and acidity (pH) is maintained at around seven units. The water in the aquarium, of course, should be clean and saturated with oxygen, and the height of its layer should not be less than twenty-five centimeters. Care for goldfish provides for a daily renewal of water, when one-tenth of its total volume is poured into the aquarium. Add water with the same composition and temperature, and with seasonal temperature changes increase and lower the degree with the help of daily water updates. It is also desirable to supply the aquarium with a filter and aerator. Determine the maximum allowable number of fish in the aquarium by a simple formula: for every ten centimeters of the length of the fish body, two hundred square centimeters of water surface are necessary. For an aquarium without aeration, this rate is doubled. And at the same time the daily replacement of water should be at least one-third of the total volume. Note that it is much easier to care for fewer fish.

The main care for goldfish is reduced tocorrect and timely feeding. It is important to remember that these aquarium inhabitants are gluttonous enough, do not know the measures in food and are prone to obesity. At the same time, they are unpretentious and omnivorous. A diet for goldfish should include live and vegetable feed. Suitable live food for them is a traditional bloodworm, daphnia, earth and earthworms, a pipe man and a coronet. Vegetable food - duckweed, riccia and salad. As additional carbohydrates, they can be given bread crumbs and very steep porridge from buckwheat, oat flakes or wheat. Porridge is boiled without salt and rolls of pellets the size of a pea. An additional protein in the diet of goldfish will be scraped meat, which can be mixed with bread and also rolled into balls. Unlike tropical aquarium fish, a goldfish needs more carbohydrates than proteins. Special dry food in the form of granules or flakes should be given in accordance with the instructions. The daily norm of food for a goldfish on must exceed three percent of its weight. More food will be eaten too, because the measures do not know. Determine the amount of fodder for fish in the aquarium can be experimented. To do this, they pour an approximate amount of food, and after fifteen minutes all uneaten food is collected from the surface of the water. Feed the goldfish twice a day. And you can not leave them without food for longer than a week. 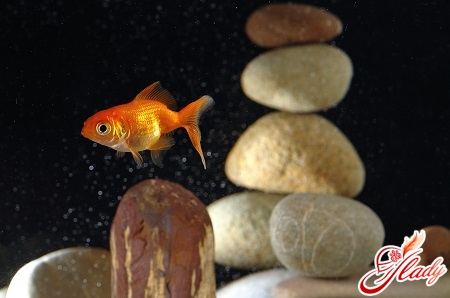 How to care for fish during spawning? For the breeding of goldfish it is necessary to have a special spawning aquarium. During mating games, males and females are planted and well fed, and ready-to-spawn females and two or three males are placed in a spawning aquarium. The female spawns eggs, swimming among aquatic plants or over them, and the male spawn immediately fertilizes. Eggs stick to the plants and on the second day become transparent. After spawning fish are planted, and the layer of water in the aquarium is reduced to fifteen centimeters. About five days later, fry appear from the eggs. It is important that during this period the temperature of the water in the spawning aquarium does not change more than five degrees. Further care for fry and conditions of maintenance completely correspond to the care for adults of goldfish. Initially, babies are fed infusorians and rotifers, and in the second year of life they are transferred to regular feed. If you properly care for goldfish, then their content will not cause much trouble. These creatures are unpretentious and cheerful. So competent care and comfortable content is all that they need. Set in your aquarium fairy fish, and who knows, maybe your desires will begin to be fulfilled! We advise you to read:

How to brush your teeth correctly?

How to brush your teeth?