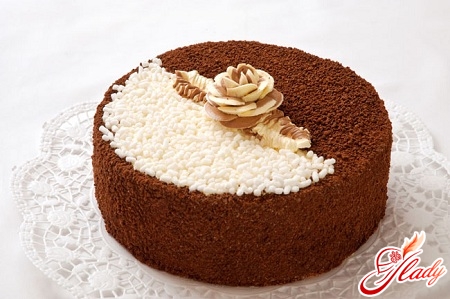 When you are assured that the famous cake "Prague"easy to bake at home, you are not deceived. It's really simple. Only now will the result of the same cake that was served in the restaurant "Prague", and then become an acute deficit product of the Soviet confectionery factories? Probably not. At home, you can easily get Prague cake, Old Prague, Chiffon Prague, but it's difficult to bake a classic Prague cake. The main snag is molasses, which is added to the chocolate lipstick for this cake. In addition, the original recipe for Prague cake includes the French liquor "Benediktin" (a monastic drink, based on a large number of herbs and honey), which must also be searched in our stores. Already four types of cream! Are you mastering this? True, four creams "Prague" contained only at the very beginning of its existence, and then it began to be prepared with only one cream. And besides, the cakes from the butter biscuit, prepared according to a special technology, were soaked in rum in classical Prague (also later removed from the recipe) and coated with apricot marmalade. Have you yet given up on the intention to bake a classic Prague cake yourself? Then we offer you a recipe for this cake according to GOST (or almost according to GOST). In any case, we tried to adapt this recipe as much as possible to modern realities.

The number of products corresponds to Gostovrecipe. As you will be able to weigh, for example, 151 grams of sugar - your concern (hint: use electronic scales). But you wanted a classic recipe for the Prague cake, and in this case the classic looks exactly like that. Ingredients:

From the given quantity of products at you shouldget a half-kilogram biscuit cake (according to GOST - 472 g). Preparation: Separate the proteins from the yolks, divide the sugar into two equal parts, mix the flour with cocoa powder and sift, let the butter melt a little (become soft). Then whisk yolks with one part of sugar. Beat for a long time and carefully until all the sugar crystals have dissolved, and the yolk mass does not become lush and light. Then beat the egg whites until they have a clear trace from the corolla or blades of the mixer. Next, for two meals, we put the remaining sugar into proteins and continue to whisk until the sugar completely dissolves. Now both whipped masses need to be mixed: carefully add the proteins to the yolks. First we inject one third of the proteins, mix, add the remaining ones and mix again. After that, in the egg mixture, put the butter, heated to 30 degrees, and the flour with cocoa powder. We do all this carefully and even gently, but quickly, so that the proteins do not settle down from our efforts. Next, pour the dough into a round shape, baked with baking paper (bottom) and bake in a preheated oven at a temperature of 200-220 degrees. To fully cook the biscuit it will take from half an hour to forty-five minutes. Ready biscuit first cool directly in the form for twenty minutes, and then take out and leave to stand for eight hours. Only with an exposed biscuit we remove the paper and clean it with a knife (scrape off the top glossy crust). According to GOST, a round biscuit semi-finished product with a brown, porous, but elastic crumb should turn out. 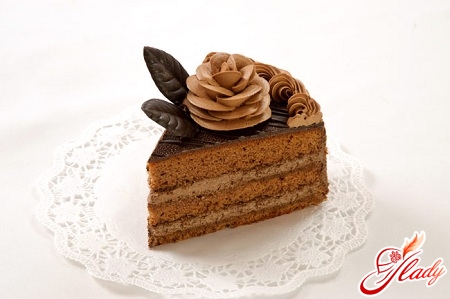 In the classic Prague cake is placed oilychocolate cream, which should look (according to GOST) as a lush brown mass (of a homogeneous consistency, with a glossy sheen and good shape). By the way, the recipe for this cream differs from the famous oil cream with condensed milk, and he himself received the corresponding cake name "Prague". Ingredients:

Preparation: Mix the yolk with water (in equal amounts), add condensed milk to them and put them on a water bath. If you do not know how to organize a "bath" for a cream, then this is done as follows. In a bowl of a larger volume, water is poured, and a smaller bowl with cream is placed in this bowl. When the water boils, it heats up and what is in the small bowl: a water bath is obtained. So, boil the cream to the consistency of sour cream, and then cool it. After that, lightly beat the butter and gradually (in several receptions) we introduce into it the cooled custard mass. At the very end of whipping, put cocoa powder in the cream. On the whole process of whipping you will take about twenty minutes, and as a result you will get 359 grams (according to GOST) of Prague cream.

Perhaps, the most difficult stage of preparation of a classical pie "Prague". But the original recipe implies the use of just such a chocolate lipstick. Ingredients:

From the given quantity of products at you shouldto get 116 grams of lipstick. But since such a small amount of lipstick is difficult to whip, you can take a double rate from the one specified in the recipe. So, mix sugar with water and heat the syrup to a temperature of one hundred and eight degrees. In a separate saucepan, heat up to fifty degrees of molasses and add it to the syrup. Next, on medium heat, boil the syrup to a hundred and fifteen degrees and add to it the essence. After that, we cool the syrup to forty degrees and beat it with a wooden spatula or in a whisking machine for twenty minutes. Cocoa and vanillin are added to the lipstick immediately before application to the cake. Note: The classic recipe abounds with instructions about the exact temperature of the products during the preparation of lipstick. For convenience, use a culinary thermometer. 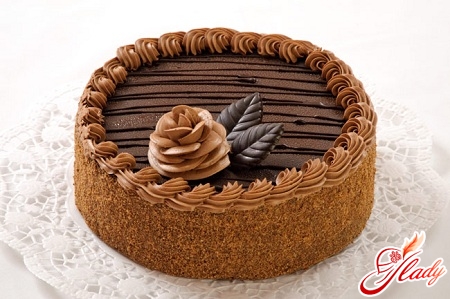 Gostov's recipe, of course, is complicated for home-made pie Prague. But if you have succeeded, it only remains to collect and decorate the cake correctly. Ingredients:

Preparation: First, we cut the biscuit semi-finished product into three cakes. The first (lower) and second (middle) cakes are spread with cream. On the layer we will leave almost the entire cooked cream, and a couple of tablespoons can be left for decoration. The upper cake and sides of the cake are coated with a thick apricot jam (marmalade, confiture). And pour the chocolate lipstick heated to fifty degrees. If desired, decorate the remaining cream and chocolate chips. That's it, the classic recipe for the cake "Prague". The legend of Soviet cooking continues to live both in the classical version and in the home kitchens, where almost every mistress tries to try the recipe of this famous cake. Perhaps, it is you who will be able to revive the culinary classics, using the Gostov recipe for cake. Dare! And cook with pleasure. PS: As a source of this article, manuscripts of the Soviet student of the culinary school, dating from the eighties of the last century, were used. We advise you to read:

Cake with prunes and nuts: recipe

Viennese waffles: a recipe for pleasure

Cake-jelly: the most delicious and delicate dessert