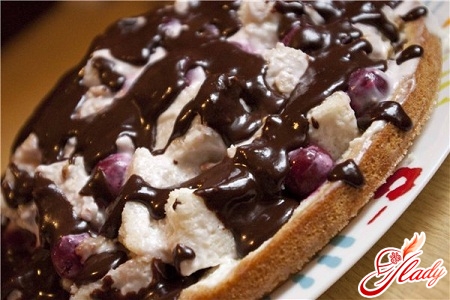 This very original name of the cake is quitenot related to the breed of dogs. And it takes its origin from the Spanish "pancha", which in translation means "pie of sour cream". And the cake itself is nothing more than a variation on the theme of Spanish sour cream cake. By the way, this cake is also known under the names "Curly Ivashka", "Curly Boy", "Cotton Curly", "Poodle Curly" and even "Ai-Petri". But, despite a rather unusual name, the Pincher Curly Pie is considered not only very tasty, but also simple in cooking dessert. And the variations on the theme of the "Pincher" simply can not be counted. Let's try to cook some of them?

According to those who tried to cook a cakeaccording to this recipe, baking is possible even for beginners. So if we are not yet a sorceress, but just learning, then it's worth trying this particular recipe. Ingredients for the dough:

Preparation: First, prepare the dough. We beat the eggs with sugar. Stirring the egg-sugar mixture, gradually add cocoa, condensed milk and sour cream to it. Continuing to lightly beat this sweet mass, pour (one tablespoon) all the flour. And already at the very end we add soda, dried with vinegar or lemonade. We divide the dough for two identical cakes and bake in two forms - round and rectangular. Biscuits are baked in the oven for 40 minutes, at a temperature of 180 degrees, until "a test for a dry toothpick." While the cakes are baked, we prepare the cream. Sour cream whisked to splendor and gradually add to it powdered sugar, and in the end - walnuts. Look for the cakes, take it out of the oven and cool it. Next, we collect the cake. We take a round cake and carefully cover it with sour cream and nuts. We leave it to soak, and in the meantime a rectangular cake is cut into cubes. Dimensions of cubes do not play a big role, but too small can get wet from the cream, and too big - to remain dry. Therefore, you need to cut cubes of medium size (as always, the golden mean) - about half a matchbox. After that, we return to our finished round cake (or we return it to ourselves) and stack all the cubes on it, previously dipping them in sour cream. You can put the cubes in different ways: chaotically, like a collapsed log, with a neat pyramid or "how it works". And then "curl" our pinscher with a thin stream of chocolate glaze. To make this glaze mix sour cream with sugar and cocoa, add a small piece of butter and heat to a boil. Cake poured with warm chocolate and sprinkle with crushed kernels of walnuts. 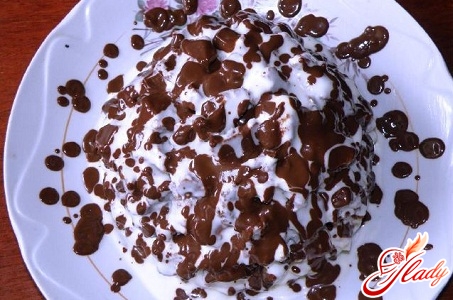 Another variation. The composition of the cake is almost the same, but the performance is somewhat different. Ingredients:

We beat the eggs thoroughly with sugar. After the mass has increased in volume, we add soda, sour cream and condensed milk to it. Well, but gently mix and one spoon pour all the flour. We divide the mass in half. One leaves white, and the second we add cocoa powder. In a greased form in a hot oven, bake both cakes for about 40 minutes. We let the cakes to cool and cut them in half - each cake for two thin ones. And then we collect the cake, alternating the light and chocolate cakes and coating them with cream. So we lay three cakes, and the last we break into small pieces. All the "wreckage" is poured into the dishes with the remains of the cream, mixed and spread from above. We pour the top of the cake with a glaze made of milk, sour cream, butter, sugar and cocoa.

Let's call this cake for a changeCurly Pinscher. Just to not get confused - if with prunes and dried apricots, then the curly girls become curly. So, for the curly version of "Pincher" the following ingredients are needed:

Preparation: For the dough mix eggs with a glass of sugar, a glass of sour cream, a can of condensed milk, soda and all the flour. Mixing, whisk all this with a mixer. The resulting dough for cakes is divided into a couple of parts: a quarter and three quarters. From the smaller part we bake a thin light cake. In another part of the dough, add the cocoa powder and prepare a chocolate cake from it. While the cakes are baked, beat the cream of sour cream and sugar and cook sweets (sour cream, sugar, milk, cocoa, butter). The composition and method of preparation of the cream and glaze for all variants of "Pincher" is the same. And for this option, we also prepare the filling from dried fruits: dried apricots and prunes are well washed, dried and cut into small pieces (you can grind it in a blender). We take ready cooled casings and from white we make a basis of a cake, spreading it on a dish and plentifully promazyvat a cream and strewing dried fruits. Chocolate cake break (cut) into pieces. After laying on the cake half of the chocolate cake soaked in cream, sprinkle them with nuts and dried fruits, and then spread out and the remaining "fragments" also dipping them in the cream. From above, the whole cake is sprinkled with nuts and prunes with dried apricots, and then watered with a sweet. And in conclusion, and sprinkle with chopped chopped chocolate. This will have the curls of our Curly Pinscher. 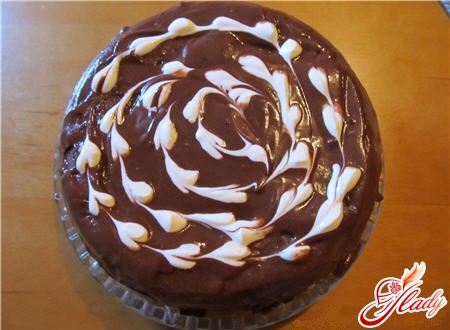 "Curly Pinscher" in the microwave

This is an option for those housewives who do not haveoven, but there is a microwave. It turns out that she is doing admirably with the preparation of the Curly Pinscher. On the recipes and the technology of preparation of cream and glaze, we will not dwell. Here they are prepared exactly the same as in all previous versions. Consider the features of the preparation of the test, for which the following ingredients are needed:

Preparation: Sour cream is mixed with sugar. We pour in the condensed milk and again mix everything well. Now turn the eggs, which we also one by one add to the dough, and behind them - and soda, extinguished with lemonade or vinegar. At the very end, gradually pour out all the flour and mix again well. Divide the dough into three identical parts. We make one chocolate, mixing the dough with cocoa powder, and alternately bake three cakes. The biscuits are baked in a microwave oven. For each of them at the maximum power it will take only 3 minutes. Just a super high-speed cake! And then we collect the cake. One white corn is coated with cream, and the second, along with the chocolate cut into pieces. Each biscuit dipped in a cream and put on the cake-base. Can be layers (white - dark), can be mixed. Top with cake chocolate glaze. If desired, you can add a filling of dried fruits, you can use any nuts, poppies, canned or fresh fruit. Very delicious turns "Pincher" with cherries and strawberries. There are fans of this cake with a filling of pineapples and peaches. Someone prefers walnuts hazelnuts, and someone - almonds. In a word, how many chefs, so many options. Because every recipe for a Pincher cake is just another variation on the theme of Spanish sour cream cake. It's like in jazz - everyone plays one melody, but everyone plays their part. Do not you want to try yourself as a culinary jazzman? We advise you to read:

Cake of sponge cakes: we will gladden a little birthday