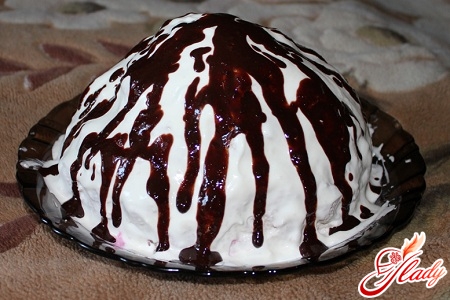 Biscuit dough is considered whimsical: then it will not rise, it will not be baked, it will burn. With experience, of course, biscuit begins to turn out fluffy and easy, and cakes from it are simply above all praise. But not all and far from the first time there is a successful biscuit cake precisely because of the capricious nature of the test. However, to the joy of the owners today you can buy ready-made biscuit skins. It is convenient for those who are baking with you, and those who bake well, but are not friends with a biscuit test. And it's not true that one does not surprise anyone with a cake made from ready-made sponge cakes! These cakes are obtained not less tasty than from baked biscuit. Well, maybe a little less emotional than homemade cakes. And you can cook almost any cake from a purchased biscuit. By the way, ready cakes save time and can become a kind of wand-zashchalochko. Here are just a few recipes of such a time-saving (but not to taste!) Dessert.

Preparation: For such a cake, we need a standard packing of ready-made cakes from vanilla biscuit and fatty (for less than 30% fat content) sour cream. It must be properly prepared for a delicious and magnificent sour cream, the traditional "Pancho" cake. Preliminary, about six hours, sour cream in a colander, covered with gauze, and leave to drain. Strain the serum (or use it for the preparation of pancakes), and put the thick sour cream into a bowl and beat it with a mixer for two minutes. After that, add sugar to sour cream and continue to whip the cream for another five minutes. Then we prepare the products for the cake. Chop the blender or coffee grinder walnuts, cut the pineapple and sponge cube cubes with a side no more than one and a half centimeters and begin to collect the cake. Mix in a separate bowl a few spoons of sour cream and biscuit cubes and put this mixture on a dish. On top, put a layer of chopped pineapple. Again a layer of biscuit cubes mixed with cream and again a layer of pineapple. So we collect the whole cake, forming a dome from it. If the biscuits are very loose, you can not mix them with cream, but do the following. On the dish lay a layer of cubes, pour them from above (not very abundantly) with cream and lay a layer of pineapple. Again a layer of sponge cakes, sprinkled with cream, and a layer of pineapple. By the way, as a basis of a cake it is possible to use the whole round cake. We spread the finished cake with the remaining sour cream and pour liquid chocolate. To do this, simply dissolve the chocolate in a microwave oven or melt it in a water bath. From above, sprinkle with chopped walnuts. We remove the cake in the refrigerator for several hours. We serve on the table chilled. 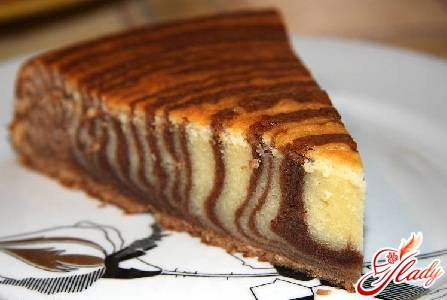 Preparation: First we soak gelatin, fill it with an incomplete glass of warm boiled water and leave it for swelling. When the gelatin swells, heat it on a water bath so that the crystals completely dissolve, filter and cool (but do not put in the refrigerator). Separate egg yolks from proteins and remove the latter into the refrigerator. Yolks are laid out in a bowl and ground with one glass of sugar, and then we add milk to them. There we put the flour dissolved in slurry, mix everything well, put it on the fire and bring it to the boil with constant stirring. Let's cool the custard. After that, put the softened butter in the custard, pour out the vanilla sugar and beat it with a mixer or in a blender until the mass becomes homogeneous. We take the egg whites from the refrigerator and beat them into a strong foam: first without sugar, and then we begin to sprinkle sugar in small portions. In the whipped proteins pour gelatin, gently mix and connect the proteins with butter-egg cream. In the form with detachable sides we put biscuit cake and spread on it cream soufflé. We spread it to make the cream fit snugly against the sides of the mold, and cover it with the second cake. We remove the cake in the fridge and leave it there until the souffle solidifies completely (for four hours). Almost ready cake is taken from the refrigerator and carefully take it out of the mold, with a sharp knife between the cake and the sides and detach them. Transfer the cake to a dish or to a cake. The final stage of the cake "Bird's Milk" has remained. On a water bath or in a microwave oven, melt the chocolate bar, let the glaze cool slightly and pour chocolate on the cake. Again, put it in the refrigerator until the glaze hardens.

Preparation: Soak gelatin, fill it with water, as indicated in the instructions on the bag. While it is swelling, we mix cottage cheese with vanilla sugar, sour cream and sugar powder and thoroughly rub it. Gelatin heated in a water bath, so that it completely dissolved, and cool. We lay the biscuit cake in a mold with removable sides. It is important that the edges of the cake fit closely to the sides of the mold. Now the cottage cheese and sour cream mix with gelatin and divide into two equal parts. In one part we put the cocoa and mix it, so that the cream becomes uniform in color. On the sponge cake we begin to spread the cream. Precisely in the center of the cake we put four tablespoons of white cream, then on it (also in the center of the cake) we put four tablespoons of dark cream. Again lay out the white cream, and it's dark. And so, until the whole cream is over. Under the weight of the layers, the white and chocolate cream will spread over the cake, forming a characteristic marble pattern. We remove the cake in the fridge so that the marble layer is frozen. After two or three hours, shift the cake to a dish and take a sample! 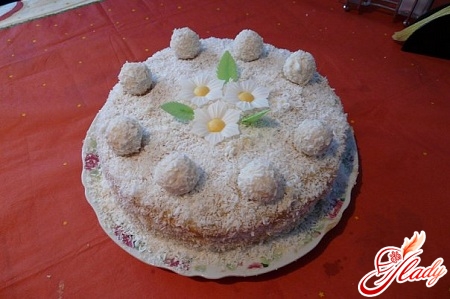 Preparation: Piece fifteen nuts left to decorate the cake. The rest of the almonds are doused with boiling water and we remove the peel from it, and then we cut it into small pieces with the help of a knife. Butter is transferred to a bowl, beat for five to ten seconds, and then continue to beat, adding condensed milk to the butter. Put coconut chips in the cream, leaving a couple of tablespoons to sprinkle the cake, and chopped almonds. In a separate bowl, whip the cream and gently add them to the oil cream. We begin to collect the cake. We lay cakes (three or four pieces) on each other, promazyvaya their cream. The entire cake is also coated with cream, and sprinkle its edges and top with coconut shavings. We decorate the top of the cake with sweets and almonds, laying out a border and placing several pieces in the center. In general, ready-made sponge cakes can be cooked almost any cake. They can be used as a basis for a cake with jelly filling or with whipped cream. They perfectly match with butter and protein cream. Delicious will be a cake and cottage cheese layer, and with jam. In a word, experiment. Cook with pleasure, and a pleasant appetite for you! We advise you to read:

How to make a cream for a cake at home?

Cake of Prague at home

Sugar glaze: a recipe for cooking

Custard for eclairs, preparation of dough

Jam from the petals of roses