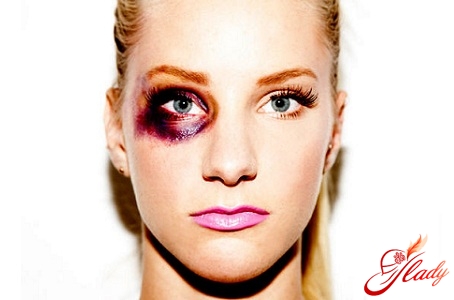 The bruise under the eye is not the most glamorous decoration. However, unfortunately, it sometimes appears, regardless of our desire. Do not be in a hurry to get upset - try to find a positive even in this situation. What is positive, you ask? Well, for example, at least the fact that you were not born in the 19th century! And it's not even the lack of mobile phones, the Internet and other benefits of civilization. In order to get rid of the bruise, at that time the doctor would probably offer you a leech. Not the most tempting prospect, is it? Fortunately, for today, mankind knows quite a lot of ways to get rid of bruises more humanely, but no less effectively. What exactly are these ways - we'll tell you a little bit lower. And first, let's find out what the bruise under the eye is, and is it really safe, as it is commonly believed? After all, few people seriously think about a bruise - well, it will hurt and pass! However, this is not so. What is a bruise? This is a traumatization of soft tissues, as a result of the impact on them of a strong mechanical effect. There is damage to cells, blood vessels. Under the skin gets the blood - there is a so-called subcutaneous hemorrhage. In the event that the impact was not very strong, only soft tissues are damaged. And in the worst case, more extensive damage and serious problems are possible. Therefore, immediately after the impact carefully monitor your health. And when the following symptoms appear, contact your ophthalmologist as soon as possible for help. Well, or at least to a trauma doctor. So:

One of the most disturbing symptoms is blurred vision. A person injured complains of a haze or a veil before his eyes. The image becomes blurry and fuzzy.

In the event that the picture before your eyes is double, a person should be very seriously worried. This may indicate a very serious injury - in particular, damage to the retina.

Often, doctors hear complaints that colored eyes and stains are flashing before the eyes of a sick person. In this case, it is also worth worrying - most likely, the injury was serious.

All of these symptoms are not related to functioningeye. However, if such symptoms occur soon after the injury, they can say that there is a concussion. In this case, without consulting a traumatologist, you can not do exactly - concussion is a serious danger to your overall health. 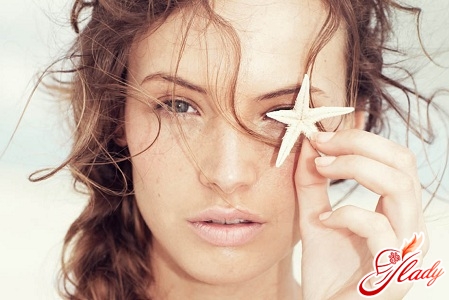 First aid with a bruise

In order that if not to prevent the emergence ofbruise, then at least reduce its area, it is necessary to take emergency measures in the first minutes after receiving the injury. And the very first and effective remedy is cold. Ideally, you need to use ice. But, unfortunately, not always the injuries occur accurately near the refrigerator - as they say, I would know where I fell, I would make straws a straw. If you are lucky and the refrigerator - or at least a grocery store - was at hand, you can use any improvised means. In the course will go anything - ice, ice cream, a bag of ravioli, a piece of meat. But if you could not find anything like that, you can use any slightly cold thing - a wet napkin, a metal object, at least a simple coin. Cold must be applied to the damaged area and leave for at least 30 minutes. Then, during the first day, ice should be applied to the injured tissues for 10 minutes, every hour. Ice has an irreplaceable effect. First, the ice prevents the development of edema, which always develops on the site of bruised soft tissues. Secondly, the ice quickly and effectively narrows the vessels. Hence, under the skin will get less blood, and accordingly, and the area of ​​the bruise will be several times less. And, thirdly, the cold reduces pain. And they are as a result of a bruise are strong enough. If the pain is very severe, you can drink one tablet of ibuprofen. But in no case do not take paracetamol or acetylsalicylic acid - they contribute to the dilution of blood. So, increase the area of ​​the hematoma. And in general - try not to take any medications without a doctor's appointment.

Treatment of bruises with medicines

To treat bruises, you can usemedications. They can be purchased at any pharmacy without a doctor's prescription. They have only a local impact, so there is no threat to the overall health of a person. And there is no need to expect side effects.

Heparin not only removes the edema, but also stimulatescirculation. So, the resorption of the bruise will occur much faster. For this, it is necessary to apply a thin layer of heparin ointment to the site of the injury, every hour on the first day after the injury, and on subsequent days - every two hours. As a rule, the use of heparin ointment allows you to get rid of the bruise for two or three days.

No less effective means - ointment"Troxevasin." It has a similar effect - improves local blood circulation, helps restore and strengthen the walls of blood vessels. Apply this ointment in the same way as heparin ointment - in the first day after the injury, apply ointment on the damaged area every hour, and then - once every three hours.

These drugs also contribute to rapidresorption of the hematoma, so it is recommended to take them in the first few days after getting injured. Ask your doctor - it will help you choose the right dosage. Traditional methods of treatment of bruises

In addition to drug treatment from bruising underyou can get rid of the eye with the help of traditional medicine. They are often no less effective and allow you to get rid of the bruise under the eye in just three to four days.

Healing properties of both honey and aloe can beto praise for a very long time. But it's better not to waste time on words, but to get down to business - to treatment of a bruise under the eye. In the first few hours after the injury, the next recipe will be optimal. Press five tablespoons of aloe juice, on a slow fire melt three tablespoons of any natural honey. After the honey has cooled slightly, mix it thoroughly with aloe juice - you should get a homogeneous mass. Pour it into ice molds and place it in the freezer - the mass will solidify very very quickly. Apply the resulting ice to the bruise under the eye every two hours, for 10 minutes. On the second and subsequent days you will need a little different remedy. It is prepared simply - pass through a meat grinder three large sheets of aloe, mix the resulting mixture with three tablespoons of honey. Before use, the mass should be slightly heated and applied a thin layer on the affected area. As a rule, with such treatment, the bruise under the eye disappears in just a few days.

In the event that the bruise is very extensive,try resorting to red pepper. You will need one tablespoon of sour cream and red ground pepper - on the tip of the knife. The preparation is prepared before using it - every time fresh, so that the pepper does not lose its properties. Just mix the pepper and sour cream, then grease the entire area of ​​the bruise. Be prepared for the fact that the skin can pinch quite a lot - it makes itself felt red pepper. He at times increases blood circulation in the injured area. And accordingly, and the bruise resolves much faster. After 10 minutes, wash the sour cream with running water, then apply some nourishing cream to prevent the development of skin irritation. Such a tool will help you to eliminate the bruise in the shortest time - in just a couple of days. However, remember that this remedy can only be used if there are no open skin lesions - abrasions and scratches.

On the second day after the injury is veryEffective will be lotions from the decoction of chemist's chamomile and celandine. Preparing the broth is very simple - place in an enamel pot three tablespoons of dried inflorescences of chamomile and chamomile herbs, fill with one liter of water. On low heat, bring the broth to a boil, reduce the heat and simmer for about 20 minutes. After that, cover the pan with a lid, add three tablespoons of any natural honey and leave until completely cooled. Strain the broth with gauze cloth and pour into a glass container. Store the broth only in the refrigerator - otherwise it will very quickly lose its useful properties. Before use, it is necessary to slightly warm the solution, moisten the cotton pad or gauze in it and apply to the affected area, for 20 minutes. Such lotions should be done every two hours. Herbs stimulate resorption of the hematoma, and honey will prevent the development of the inflammatory process.

It is impossible not to mention that the second andthe next day after the injury, bruises under the eyes should be warmed, in contrast to the first day when only the cold is needed. For warming, you can use any improvised means - hot lotions, compresses, bottles with warm water. It is necessary to warm up the bruises under the eyes as often as you will get. The positive effect of warming up the bruises is very simple - the heat improves blood circulation and promotes absorption of the strongest hematomas. However, closely monitor the temperature - it is unlikely that you want to get a bruise and get a burn. As you can see, you can get rid of the bruise under the eye by everyone. And for a fairly short period of time - only three or four days. Although if you want to observe the fascinating process of "blooming bruise", which will last from 10 to 14 days without treatment, just forget everything you learned about in this article. We advise you to read:

Drugs that enhance immunity and strengthen the body

How to gain weight in a week: recommendations and tips

Candilomatosis: genital warts in women and men and their treatment

Human papillomavirus in men and women