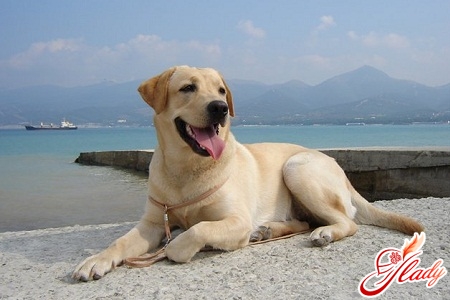 The Labrador breed today isthe most in demand in the world. The secret of the fantastic and ever-increasing popularity of these dogs lies, first of all, in their striking charm, which they fight each and everyone practically from the first minutes of acquaintance with them. Initially, the Labrador was bred as a working breed, which is why many of them are currently used as rescue dogs and guide dogs. This breed was born on the east coast of Canada on the island of Newfoundland. There are three main versions about the origin of the name of the breed "Labrador". The very first Labradors were only black, which caused similarity to the stone "Labradorite". Perhaps it was in honor of him that the Labradors received their name. According to the second version, the ancestors of Labradors were withdrawn on the Labrador Peninsula. The third version of the origin of the name of the breed is the version that the Portuguese named Labrador (labrador in Portuguese as "hard worker") were named for their unmatched performance.

The ancestors of modern Labradors are socalled water dogs, which appeared in the XIX century on the island of Newfoundland. These dogs were faithful assistants to fishermen in England of that time. Englishman Peter Hawker was brought to the UK several such individuals, which were then called the dogs of St. John's. As a result of their crossing with a retriever with curly hair and presumably a setter and a foxhound, a labrador appeared. The year of the first established breed standard is 1887. The British Kennel Klub in 1903 recognized only black labradors, nevertheless, later, at the end of the 20th century, the fawn color became permissible, and even later the chocolate color. In Russia, the first dogs of this breed appeared only in the late 60's - early 70's. 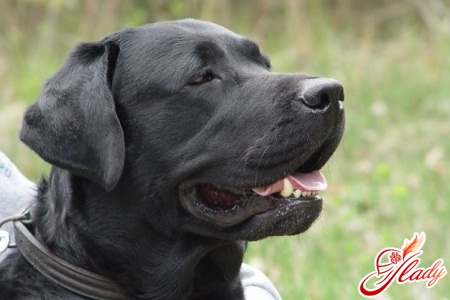 Features of the nature and possibilities of Labrador

The labrador dog possesses an exceptionalfriendliness and cheerfulness, quick learner and tirelessness in work. The nobility and devotion of dogs of this breed are far from their only virtues. They are also distinguished by exceptional intelligence and intelligence. When they are brought up, there are usually no problems, because they never claim leadership and always obey their master. While communicating with a very young children, the Labrador still has to look after him, because by virtue of his powerful physique he can accidentally overturn or push the child. A child of the older age can very much like to play, run and walk with a dog of this breed. Labradors are very active, like to play mischievous and frolic, so they are unlikely to fit elderly, weakened people or a young family. They get on well with the children, but you will hardly be able to see the guard in his face, since the maximum that can be expected from this dog is a short barking, which will very quickly be replaced by a wagging tail. Labradors, through their exceptional friendliness, get along well with other animals. Some people, observing excessively vigorous and reckless behavior of Labrador puppies, can conclude that they are silly, but this is not so. It is just necessary to take into account the peculiarity of this breed, which is that up to three years they are immature mentally, and they will have to be taught to think and act independently. It is not necessary to punish a dog, the labrador reacts very well even to a strict intonation. He is very curious and energetic, and with the help of play and encouragement, you can achieve almost any height in his training. Exclusive obedience, ability to learn and excellent character led to the fact that the Labrador Retriever is considered a truly universal breed. Initially, the dogs of this breed were brave sailors, skillful hunters, they have also long since mastered the role of a companion dog. Recently, due to their unlimited devotion to man, patience and perfectly developed intuition, they are increasingly being used as guide dogs for blind people. Thanks to an excellent scent, combined with exceptional curiosity, Labradors have no equal in the search for explosives and drugs. This possibility of using this dog is by no means exhausted. Labradors have long been used abroad as a dog therapist. They undergo special training to communicate with sick people and children. Such therapeutic communication gives truly phenomenal results. These priceless dog therapists are able to help even epileptics, as they can foresee the onset of a seizure and warn a person about moving to a safe place. It is important to note the extraordinary mutual understanding and devotion to its owners. Another unusual profession of this amazing breed is a police dog. Despite all his good nature and a priori absent from the Labrador aggression, such a dog is able to track down, grab and detain the offender. To this work, the labrador refers to both the game, so it can not do any harm to the criminal. In many respects due to exactly the kindness and calm, relatively uninvited temperament, policemen of many countries choose Labradors as their reliable assistants. Because of their devotion and desire to be useful to the owner, these dogs are excellent at coping with such work. It is difficult to overestimate all the possibilities and abilities of this truly unique dog. The Labrador is ideal even for work in the search and rescue service on the water, since it is a born swimmer, able to stay in very cold water for a long time. The only "defect" of this dog, perhaps, can be called his excessive credulity and too much friendliness. This should be taken into account by all future owners of this wonderful dog. 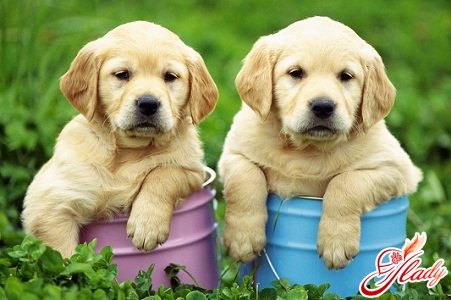 The breed of labrador dogs has an excellent woolencover, covered with a layer of protective grease, but this does not mean that you do not need to look after his coat. It is necessary to clean and comb the hair and undercoat with these animals once or twice a week, this will be quite enough. Bathing dogs are best done in a lake or river, but periodically you should bathe it at home using a small amount of high-quality shampoo. It is necessary to periodically inspect the pet for the appearance of fleas or ticks on its body. Particular attention should be paid to the ears of your pet, as they are most prone to inflammation and all sorts of infections. For puppies up to three years of age, in the process of constant growth and development, it is especially important to ensure sufficient motor activity. For the health and full life of the dog, two walks a day outdoors are enough. At the same time, it must be remembered that up to three years of labradors should be walked exclusively on a strong leash. And considering that the dog has very strong neck muscles, you should always be ready to avoid unexpected overturning of you to the ground. In addition to quiet walks, this breed needs active games on the street or in the park. The best place for this can be a spacious backyard, especially if it has a high fence, because labradors are very fond of jumping. Summer fun in the yard can be replaced by swimming in water.

How to choose a real Labrador puppy?

If you decide to get a Labrador, then youjust need to have at least a minimal idea of ​​this breed. To get true knowledge about a dog of any breed is possible only with a detailed acquaintance with the main provisions of the standard. Avoiding trouble when choosing a dog can only be accurately knowing the basic requirements that a real Labrador Retriever should meet. In order to understand exactly where to get a thoroughbred Labrador, it would be highly desirable to purchase a specialized printed edition for this breed and get acquainted with the issues of content, upbringing, and also with the standard. It will not be superfluous also to visit several large dog shows, where you can get an idea of ​​the types and appearance of this breed of dogs. In the same place, you will be able to see the potential father and mother of your future puppy, as many breeder breeders periodically participate in similar exhibitions to maintain their image and career. First of all, you should determine the gender and color of the puppy. The acquisition of a Labrador puppy in Russia is advisable only in specialized clubs and nurseries that are part of the structure of the Russian Cynological Federation. It is highly desirable that when buying a puppy you are accompanied by a professional cynologist. We advise you to read:

What to feed the hamster?

How to wean a puppy to bite?