Would you like to make a shamballa bracelet with your own hands? If the answer is positive, then first you need to think about what we need to work.

What do you need to make a bracelet?

First, we will consider in detail the weaving of a classic bracelet. 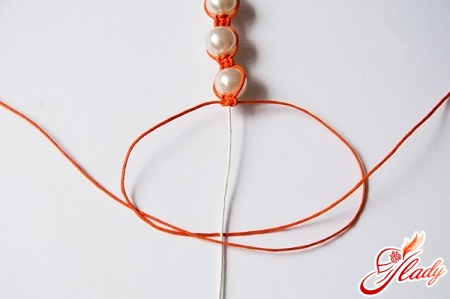 Description of the process of weaving

So, let's get started. Sit down at the table, put in front of you the device you made with two studs, or think about what to fix at least one end of the cord. By the way, you can use tape or sticking plaster. Cut about 40 cm cord, tie one end to the far carnation (or fix it on the working surface). This we will have a so-called thread-base. Cut approximately 1.5 m of the cord and tie it with the usual knot for the warp thread, retreating about 5 cm from the fixing point so that the ends of the thread are the same, that is, in the middle. We thread on the thread-base of the bead in such a sequence, as one would like to see a ready-made bracelet. We fix the other end of the warp thread. We tie a knot at one end, that is, mark it in such a way so that we do not confuse the weave. Weaving is carried out according to the principle of the macrame scheme. We take the end of the cord with a knot and conduct it under the warp-thread and over the other end, and draw the edge without a knot over the filament-base and under the other end of the cord. We tighten the knot. Then continue the same way and knit about 1.5 cm. Then move one bead and weave it in the same way, tying 2-3 nodules. We continue until all the beads are braided, then we knit another 1.5 cm of knots, as in the beginning. We fasten 1-2 knots and cut off the working threads. We fix the cutting places with PVA glue or varnish, if this is a waxed cord; we process super-glue or we melt with fire, if the cord is of a different quality. Remove the finished bracelet from the device and begin to weave the lock. For this we need about 40 cm cord. Fold the bracelet so that the threads are parallel to each other, we connect them with a cord (the ends must be the same). Plait in the same way as a bracelet was woven, the length of the lock depends on the size of the wrist. The finished product should not fit tightly around the arm. The lock widens, and thus it is convenient to put on. Usually the length is 1-3 cm. We knot 2 knots, we cut the yarn, fix it in the same way. At the ends we put on small beads, we fix with knots. The length of "visyulek" - as you like, but on average about 4 cm. 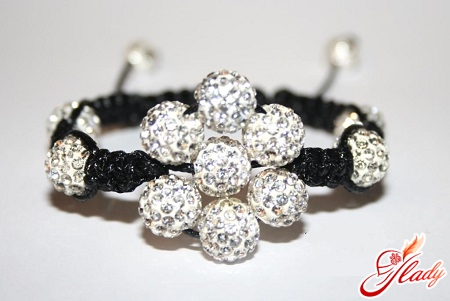 Other types of shamballa bracelets

Along with the classic shamballa bracelet,there are also its varieties. This is a two-row (double) and triple bracelets. To weave a double (two-row) shamballa bracelet, we need two warp strings 35-40 cm in length. We fix them with the method considered earlier, we put on each required number of beads, preferably the same size. We tie a working thread 1-1.5 m long. Shave a 1.5-2 cm knot, then take one thread on the right and wind the whole set of our beads in a spiral. Now take the second thread, the first bead is not wrapped and start to descend in a spiral in the opposite direction. If the bracelet begins to spin, it should be pressed with adhesive tape to the work surface. A sham 1,5-2 cm knots, as in the beginning, after this we make two usual knots, cut off excess threads, fix with glue (varnish). The cloak of the plait is similar to the previous version. To ensure that the threads are not twisted and weave it was more convenient, you can fix them with a paper clip. Make out the ends with beads, leave the "viscule" about 4 cm. Triple bracelet with a plait, using 3 warp threads, for each strung beads. We weave by connecting our own imagination. The cloak of the plait is similar to the previous one. Beads can be worn on all the ends, that is 4 (for double) and 6 (for triple) bracelet, and all the ends can be fixed with a single bead, in which case the hole should be suitable.

Poincetia from paper: a fairy tale near

Organza flowers by own hands

Flowers from napkins with their own hands