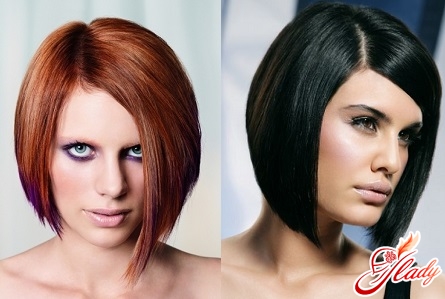 Every woman knows how to make Bob on shorthair. But not everyone knows how these haircuts appeared in the fashion industry. It is commonly believed that Bob (in a different way) was introduced into the world of fashion by dancer Irene Castle. In the early 20th century, she once simply cut off her long braids, which prevented her from dancing.

Some of the history of the amazing transformation

Irene Castle saw everyone well-known Coco Chanel andcopied the image of the dancer. In the wake of Mademoiselle Coco, under the new "Kare", movie actresses Louise Brooks and Clara Bowe cut their hair. Since that moment, this famous hairstyle has gone to the masses. Over time, the fashion changed, the idea of ​​a given haircut was transformed. So, in the 50s of the last century it was stepped with an obligatory bang. The length of the fashionable Kare in those days was no less than the chin. The spirit of the 60s of the 20th century left a mark on many spheres of that time. He did not ignore the fashion industry. The Bob of those years was modernized by hairdresser Vidal Sassoon, who came up with a new image for actress Nancy Kwan. He became lush, combed. In the 70s short cuts of Kare were characterized by smooth curls with curls on the tips. In the 80 years they changed and became straight or slightly disheveled. At the end of the 20th century a multilayered volume appeared with straight strands. 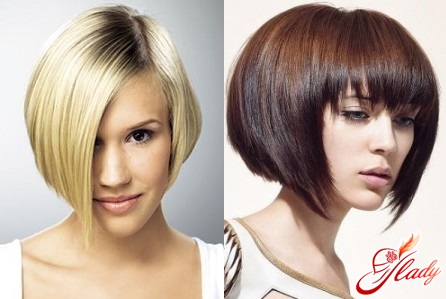 In our time, such haircuts have become associatedwith asymmetry. Those who like non-standard form and are not afraid to experiment, it is worth trying on this image. This version of the hairstyle is universal, suitable for girls with different hair length and face shape. For example, owners of a round person can choose for themselves a corner Bob. This is a variant of a hairstyle for short hair, which visually corrects the features of the round face, making it more elongated. The hairstyle on the round face should not be very short. The length is not higher than the chin, otherwise it will appear visually that the face of the cheekbones is even wider. For a round face, the perfect Bob for short hair is a haircut of A-silhouette with strands raised at the top, and a little longer in front than behind. Visually, these long strands will make the face already, add attractiveness and hide the shortcomings of the round shape. A-silhouette will look great and on the hairstyle for a square face. On the oval face shape it will look good as a strict short square with a bang, and air locks. Also perfect will be the version of Bob with a neat back and asymmetrical bangs. Bob on thin and dense hair

Haircuts for short hair are ideal andflawlessly look on thin hair, if it is a multi-layered Bob with a length of strands not lower, but higher, that is, shorter than the chin. It is at this length that short strands look easy and free. In addition, the multilayer way of laying will allow the thin curls to impart an additional volume. The shorter the haircut, the lighter and more bulky it will look. Too thick hair, not longer than the shoulder blades, can be weeded out if we make the filing, so it becomes multilayered. At all times women tend to be beautiful and well-groomed. The standards of beauty have changed, but the desire of a woman to look attractive, stylish, fashionable has not died out. To help the ladies came various means that helped them maintain an impeccable appearance. Various tricks have been invented that have built them, made a beautiful figure, decorated the face, and also turned their short or long hair into an object of admiration and pride. Gradually we came to what is fashionable and stylish, but because it's beautiful in our understanding. Modern haircuts Bob - this amazing quads. They fit different types of hair, different facial shapes. From the bold hairdress of the dancer Irene Castle, she became an elegant, bright hairstyle for short hair.

How to protect hair in the cold season

Castor oil for hair growth: use

Chest for the oval face: how to create a new image

Mask for hair with brandy and honey