To the great regret, it sometimes happens thatpeople close to us are seriously ill and are deprived of the opportunity to move, spending all their time in a reclining position. Whatever impact this event does not become for you, you will have to put up with it and learn the basics of caring for lying patients. At first glance, this science is not easy, but very soon you will master all the skills of care. The first aspect, which should be closely monitored, is the issue of "bedsores treatment and prevention." In order to get the full information on how to prevent the occurrence of pressure sores, or to cure the already existing ones, you need to be well aware of what pressure sores are and what factors cause them to appear in a sick person. Bedsores are nothing more than necrosis of the soft tissues of the human body. The necrosis of tissues arises as a result of prolonged disruption of normal blood supply, and as a consequence, eating disorders. There are such conditions in the event that the tissue of a sick person for a long time is under pressure. The most common bedsores are formed:

The occurrence of pressure ulcers is fraught with variousconsequences for human health. So, for example, bedsores are very dangerous in that even with the most minimal surface damage to the skin, the damage to internal tissues, including muscle and bone. Often, large pockets and cavities are formed in the lesion, especially if bedsores are formed in the area of ​​the ischium bones and hip joints. In especially severe cases, pressure sores can even lead to the need for amputation of the lower extremities of the sick person. No less often bedsores lead to inflammatory processes that occur in the periosteum and bone tissue, osteomyelitis and periostitis. As a rule, if the edges of the wound are adjacent to the bone tissue, one can for sure suppose the patient has a contact osteomyelitis. At the beginning of the disease, the discharge from the wound surface of the skin is transparent, without any odor or impurities, then as infection progresses, infection occurs, and a pus from the putrefactive odor appears. All the principles of treatment of decubitus are aimed only at one goal - as soon as possible to save the sick person from the existing inflammatory process, and then achieve complete regeneration of the skin. After curing a sick person, your priority should be the prevention of pressure sores.

The first thing you need to start with is a localtreatment of decubitus. The affected surface of the skin should be treated three times a day must be treated with hydrogen peroxide and washed with antiseptics, for example, a solution of furacilin. After this, it is necessary to treat the wounds with a hypertonic solution and apply a bactericidal ointment. When carrying out all types of manipulation with pressure sores, watch for sterility. Your hands should be cleaned up and nails cut short. All the accessories that you will use to care for pressure sores, should be sterile. In the pharmacy you can buy sterile cotton wool, gauze and bandages. During the treatment, you need to give the patient such a position that there is absolutely no pressure and pressure on the pressure sores. In the event that you are unable to cope with the treatment of pressure sores yourself within one month, you should seek the help of surgeons. Further delay can be quite dangerous for the health of a sick person. However, when contacting a surgeon, be sure to check with your doctor if he has any experience of plastic treatment for pressure sores. As a rule, surgeons of district polyclinics do not have the necessary experience to treat decubitus by plastic surgery. How does surgical treatment of decubitus occur? The edges of the wound are excised with a scalpel until healthy tissues appear. After this, the wound is closed by skin-muscle or skin flaps, after which the healing process begins. As already mentioned above, in no case can not be delayed with seeking medical help, otherwise to cure serious bedsores doctors will have to resort to amputation of the extremities.

Prophylaxis for the formation of pressure sores

Prophylaxis and treatment of pressure sores is necessary forpreservation of the health of a sick person. Moreover, the prophylaxis of pressure sores often gives a much more effective result than the painful and long treatment of bedsores that have already formed. To achieve success, prevention should be regular and comprehensive. The first thing you should do is make up a special diet for a sick person. You need to pick up those foods that contain enough nutrients, such as proteins, fats and carbohydrates, vitamins, micro and macro elements, minerals. Be sure to monitor the drinking regimen of a sick person and his diuresis. Try not to allow the appearance of edema, since they greatly increase the risk of developing pressure ulcers in a lying patient. In the medical supplies store, you can easily purchase bedside care items. Very well helps to prevent the occurrence of pressure ulcers so-called anti-bedsore mattress. All mattresses operate on the principle of anti-decubitus systems. At the heart of the action of the mattress is a scheme of constant changes of those points of support on which the sick person lies. This effect is achieved due to the fact that there is a regular change in the volumes of those compartments into which the mattress is divided. The mattress has its own compresses, which inflate the compartments of the mattress in a strictly defined sequence, according to the established scheme. As a result of this, the surface of the mattress is in continuous motion, constantly exerting a massaging effect on all soft tissues of the lying patient, which touch the surface of the mattress. A massage is a constant redistribution of the pressure that exists from one part of the body to another, which allows you to maintain a full blood circulation in the blood. Thus, the main cause, which causes the formation of pressure sores, is eliminated. In addition, doctors have established an interesting fact - the anti-decubitus mattress not only helps to prevent bedsores, but also effectively eliminates sleep problems, it has a beneficial effect on the overall condition of the body, in particular on the nervous system, blood circulation and muscle tension. Very many inhabitants believe that such mattresses are intended for use only in a hospital. However, this is not so - all kinds of these mattresses are very simple to use, it is not difficult even for an elderly person to cope with their use. Compressors work absolutely silently, which allows you to use the mattress around the clock. In addition, mats against decubitus are very simple to operate and can be used effectively, both in hospital settings and at home. Modern models of these devices are equipped with noiseless compressors, which can work around the clock. All mattresses are made of a durable material, which, moreover, has a moisture resistance. Over the mattress, as a rule, a special cover is put on, to improve hygiene. The lining for the prevention of pressure ulcers, of course, is not as effective as an anti-bedsore mattress, but it can also provide invaluable help in caring for bedridden patients. The lining should be placed under the coccyx or buttocks, changing its location every few hours. The lining is most often made of medical rubber or latex, so it is easy to keep it clean. Approximately the same action has a pillow for the stroller. It is designed to distribute the pressure uniformly, which causes the weight of the sick person. This significantly reduces the risk of developing bedsores. Pillows are produced from various materials, but the most common are gel or latex. Particular attention should be paid to the condition of the patient's bed. If you do not use an anti-decubitus mattress, make sure that the bed surface is absolutely level, without any depressions or bulges. The same applies to bed linen. A person caring for a bed patient should make sure that there are no wrinkles and crumbs from food on the sheets - they also often provoke the development of pressure sores. Bed linen must be clean and dry. All of the above-described care facilities for bedridden patients should be purchased after a preliminary consultation with a doctor who knows the features of the course of the disease and will recommend the best option for you. By the way, often in modern hospitals there are all necessary items for caring for bed patients. Therefore, if your loved one is on inpatient treatment, do not rush to buy everything yourself. First, ask the doctor if there are hygiene products available for bed patients in the department

Other prophylaxis measures for bedsores

In addition to the use of special toolsthere are general rules of prevention, compliance with which will significantly reduce the risk of developing pressure sores. However, before using each of them, be sure to consult with your doctor. Perhaps a sick person has some kind of specific disease that can serve as a contraindication to one of the prophylaxis measures for pressure sores. However, the rules for taking care of bed patients must be observed. The following is a simple algorithm for the prevention of pressure sores:

The initial stage of development of bedsores

In the event that on the skinto appear redness, you need to be alerted. After all, redness is the beginning of the formation of pressure sores. Such places need to be processed with special care. In the morning, lubricate these places with a weak solution of potassium permanganate, and in the evening - spirituous tincture of calendula. If you have a blue quartz lamp, it will also effectively help prevent further development of diaper rash. If the reddening of the skin was not noticed in time and measures to prevent further development of diaper rash were not carried out, blisters appear on the skin. Bubbles contain a clear liquid inside. They need to be treated as follows: bubbles need to be abundantly lubricated with 1% zelenium solution, and top with a dry bandage. Make sure that her pressure is not too strong. If a purulent wound is formed, the "Iruksol" ointment is very suitable for its purification. It is used as follows: form a gauze swab, apply a lot of ointment on it and put on the wound, fixing it with a bandage. Change the bandage two times a day. A similar but less rapid effect is possessed by Vishnevsky's ointment and levomecol.

Treatment of bedsores by folk methods 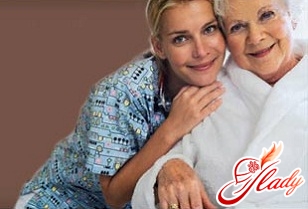 If a patient has bedsores, folkfunds can provide effective assistance. However, in no case should you refuse to observe medical workers, because only a doctor can adequately assess the condition of a bedside sick person and in time to notice a possible deterioration of the condition. We advise you to read:

How to get rid of toothache at home?

Neuritis of the facial nerve: treatment

Compression fracture of the spine