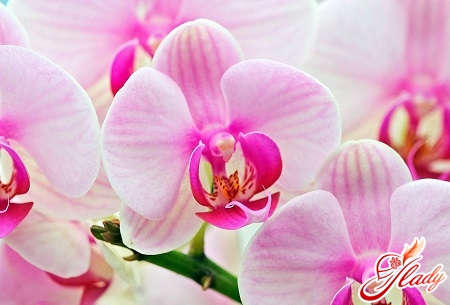 A room orchid is one of the favorite by manyroom flowers, which is distinguished by a variety of colors, long flowering and unpretentiousness in care and maintenance. This plant impresses with its bright appearance - they want to constantly admire. Perhaps that's why all those who once purchased an orchid, forever become fans of this plant. Today, breeders continue to develop all new varieties of orchids, which are characterized by special coloration and unique forms, and care for a particular plant species is also different. The palette of the orchid flowers is extensive. It can be a snow-white color, gradually turning into light yellow, or orange, which gradually becomes pink, passing through terracotta. The flower is striking not only with unique colors, but also with amazing drawings: delicate and filigree stripes on petals, thin veins, flowers in specks or dark colors look unique and mysterious. Room orchids are also called phalaenopsis or butterfly orchids. Her flowers are like moths that live in the tropics. So, for the decoration of a small room, miniature varieties of plants can approach, which, for the duration of their flowering, will not be inferior to larger varieties. Yes, and care for such an orchid is quite simple, which we will discuss in more detail and talk.

Despite the fact that the orchid is a tropical flower,keep it simple and caring for it does not imply buying super-expensive drugs. The plant is not very freaky. The most suitable room temperature for phalaenopsis is 20 degrees. The only thing worth emphasizing on is a quality primer and sufficient lighting. Orchid flowers should receive a maximum of light, but direct rays on them should not fall at the same time - it is very important to look after the plant properly. Watering is best done once a week, using water at room temperature. Many immerse the pot with the orchid in a special container filled with liquid. It is worth noting that the phalaenopsis roots are hypersensitive, because their feeding is very fast. Accordingly, try not to overmoist the soil. Proper care implies a good fertilizer. For root orchids, root feeding is best, as well as preparations that need to be moistened with soil. Add such fertilizers to the water in order to moisten the substrate, and use with every third watering. For fertilizing, complex fertilizers that are specially designed for epiphytes and phalaenopsis are best suited. If in the room where the flower is located, the air is dry, then spray the plants from the spray each morning - such care will ensure good hydration. There comes a time when the plant fades. It is then necessary to carry out pruning. But remember that you can not cut the peduncles completely, under the root, in any case. It is enough just to shorten them over every second sleeping kidney, which is a small seal on the stem of the plant. Usually it is from such a kidney that a new flower appears. How long does the period last until the discovery of new buds and flowering? About three months. If you suddenly notice that the flower stalk dries and becomes brown, be sure to remove it. Here additional care is important. What should be the soil for indoor orchids? It must be, first of all, hygroscopic and breathable. As a rule, a mixture of soil for phalaenopsis consists of pieces of bark in combination with charcoal and expanded clay, moss and earth alternating with sphagnum. It should be noted that the moss laid out on the ground does not just look very impressive, but also prevents the plant from drying out. Now about fertilizers, without which good care for the orchid is impossible. In this case it is necessary to purchase balanced top dressings, in which nitrogen predominates. This will allow the plant to grow and bloom more brightly. Be sure to use all fertilizing and fertilizer according to the instructions, otherwise you can only harm the plant. As soon as there is a period of rest of the plant, it is better to reduce the fertilizing. In the beginning we already said that orchids love forvery long and spectacular flowering. Flowers plants are quite dense and strong, because they can please their appearance almost a month, and sometimes two. Flower buds live even longer. When can Phalaenopsis bloom? At absolutely different times of the year. If you properly care for the plant, then the peduncles branch, develop, and the same flower stem can bloom several times. If the orchid is already adult, strengthened, then it can and at all produce within one year about three peduncles. But it is not necessary to believe that Phalaenopsis does not need special conditions for its development and flowering - care must be considered. If the orchid is large-flowered, the peduncles will appear seasonally, but their flowering can be controlled by changing the ambient temperature. So that the kidneys begin to grow, try to ensure that the daytime temperature for three weeks is not above 18 degrees, and night - 12. Everything is explained by the tropical origin of phalaenopsis - this is the monsoon climate. In the conditions of our climate phalenopsis with large flowers and their varieties begin to form flower stalks in autumn, and the process continues until summer. The more the age of the plant, the denser its flowers become and the more the peduncles form. Each new flower spike is longer, correspondingly, more flowers appear on it. Please note that summer orchids need to be taken care of a little differently. At night, the temperature regime should not be lower than 18 degrees, and in the daytime - 26 and above. If phalaenopsis grows in such conditions, then the development of peduncles will be successful for a whole year. It is worth mentioning about orchids with so-called growing flower stalks. The situation is the same - the older the plant, the more flowers will grow. So, if you do not cut flowers from such orchids, then after flowering they will again develop and bloom again. Often, they form air "children", which also need to be taken care of. But more on this later.

In indoor conditions, orchids propagate vegetatively. This happens in the following ways:

The latter method is the most sparing and suitable for indoor orchids.

Formation of children in orchids

Previously it was said that for phalaenopsis hashigh temperature value. It affects not only flowers, but also the formation of airborne children. If you constantly raise both the humidity and the temperature, then this will contribute to the development of not the flowers, but the daughter plants. This is a feature of all orchids, however, most clearly manifested in individual species, in particular, in Shilleriana. If you do not spend planting children in plants of this species, soon they will grow bright specimens, differing cascades of branches, dotted with flowers. Of course, special care is needed here: periodic watering, sprinkling of branches and flowers, petals on them. All this will ensure a long period of life for the orchid. There are a lot of phalaenopsis species. Initially, it should be said about the kind of "mix" that many growers consider a special hybrid of the same name trademark, found in online stores. In reality, plants, on the packaging of which the "mix" is indicated, do not presuppose the possibility of selection either by variety or by color. Of course, all sellers will promise to take into account your needs and desires, but this does not mean that you will receive exactly what you saw on the picture. Therefore, know that the orchid "mix" is not a hybrid and certainly not a brand, it's a simple trade mark. In general, all varieties of phalaenopsis are divided into two main types: hybrid and species. If you look at room collections, then here you can often see medium-sized species: Phalaenopsis Pleasant, as well as Phalenopsis Schiller and Stewart. From mini-categories it is necessary to allocate a pink orchid. But Phalaenopsis Giant is a large kind of home-grown orchids. Hybrid varieties breeders receive in the process of intergeneric and interspecies selection, during which standard hybrids are distinguished. Previously, very valued orchids, possessing dense peduncles and large white or pink flowers. In order to create a similar hybrid, natural natural species were used, the flowers of which are quite large. Perhaps that is why a stereotype arose that the phalaenopsis has flowers of white, pink or gently purple, and its petals have a rounded shape. A little later, some species were hatched, the flowers of which are even larger and reach about fifteen centimeters in diameter. Of course, they are even more impressive and amazing, but they do not have the amazing elegance and tenderness of a traditional orchid. Yes, and care for such a flower is even more difficult. Further, hybridization gradually involved species that have a bright color and variegation. It is at the expense of such hybrids that phalaenopsis has acquired a variety of colors, ranging from crimson-red, bright, to neutral shades of peach and golden colors. It is worth saying that among the cultivation of orchids there are their fashion legislators. So, today Taiwan is a country where phalaenopsis is grown on a grandiose industrial scale. Taiwanese species are characterized by relief, patchy or simple monochromatic petals - they made a kind of revolution in the world of orchids. There are also special kinds of hybrids in Taiwan, for example, novelli-phalaenopsis, which represent clones of hybrids selected according to special characteristics. Today, the most popular species of orchids are the following:

In general, this genus has about one hundred species. Grow, as a rule, in the west of Ecuador, as well as in Colombia, Honduras, Costa Rica, Peru and Mexico at altitudes of about 2,000 meters. This name was given to the plant due to the fact that its flowers resemble the jaws of a dragon - it looks very impressive!

This species has about one and a half thousandspecies that grow in the tropics. The genus is distinguished by the presence of bulbs, which carry a pair of apical sheets, the shape of which can be completely different, but at the same time, the leaves are soft. Care for bulbophyllum involves good indoor lighting, feeding several times a month and air of high humidity.

A no less popular orchid species, its varietykinds of huge - about 2 000! It grows in the south and east of Asia, as well as in Australia and the islands in the Indian and Pacific oceans. This species is one of the most extensive. Flowers dendrobium have a bright purple color and wide leaves. How to care for dendrobium? Provide the plant abundant watering in the process of growth and get a good substrate. Do not forget to use fertilizer complexes, without which it is impossible to properly care for this plant. Also you can please yourself with Wanda orchid, which has a delicate violet color and incredibly beautiful flowers of a special, round shape, or diaphanant. It is impossible to single out a specific species of this magnificent plant - each is beautiful in its own way. It is thanks to the interest and enthusiasm of breeders that the number of orchid species grows at a rapid pace, and in the near future there will be an incredible amount of them. Among the variety, you can choose between medium and mini-orchids, as well as specimens with large flowers. This is truly a living miracle! Proper care for the plant, good food and care - a pledge that the orchid will please you more than one year!