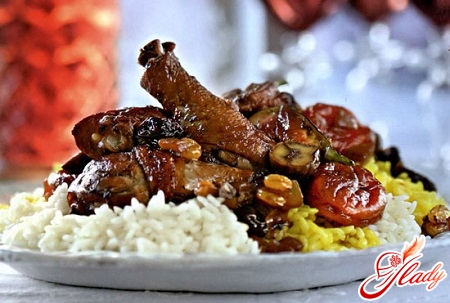 Plov is definitely an Eastern dish. And the East, as you know, is a delicate matter. And the pilaf's recipe is far from universal. No, of course, any pilaf is prepared according to a certain, established technology for centuries. Yet the recipe, for example, of Uzbek pilaf is very different from those for which this dish is prepared in Azerbaijan or in Kazakhstan. By the way, Azerbaijani pilaf in general has one remarkable feature. The fact is that the pilaf recipe in Azerbaijani means the preparation of kazmag - a thin layer of unleavened dough, which is lined with cauldron (or other utensils) for pilaf. And, by the way, the recipe for kazmag is also not as simple as it might seem. However, let's talk about everything in order. 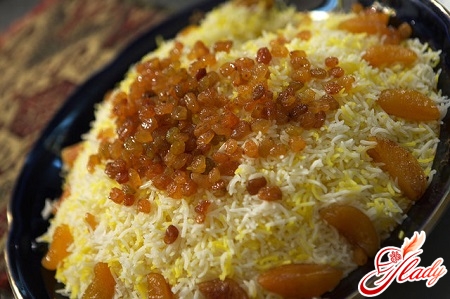 Kazmag is an integral part of the majorityAzerbaijani pilaf. This layer of dough, firstly, will not allow the pilaf to burn, and secondly, it will be an excellent addition to the ready-made dish. Grilled crusty dough is served to the pilaf, greasing it with melted butter. Preparing kazmag as a regular dough for noodles or dumplings. However, for each Azerbaijani pilaf there is a recipe for Kazmag. Kazmag for meat, fish and egg pilaf Ingredients:

Preparation: Prepare the dough for kazmaga very simple. Flour sift and pour into a bowl. Collect the flour with a little pea, add salt and egg, and then start pouring water, mixing a steep dough. When the dough becomes elastic and homogeneous, add oil to it and again thoroughly mix it. Oil must be placed at the very end, otherwise the fat will not allow flour gluten to swell, and the dough will not get the desired elasticity. Kazmag for fruit and milk pilaf Ingredients:

Preparation: We cook kazmag, as in the previous recipe. Mix the sifted flour with salt, sugar and cinnamon and add the egg. Then pour water and knead the dough. At the end, add oil and mix the dough again until the oil is completely absorbed. 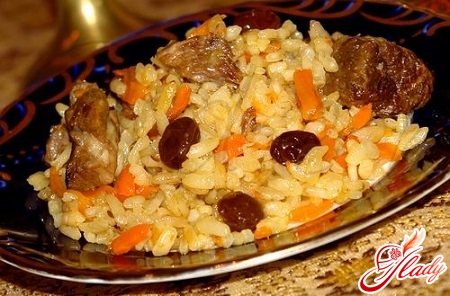 This is a recipe for Azerbaijani pilaf from lamb, which is a so-called floppy pilaf. And we will cook it without a cramp. Ingredients:

Preparation: For pilaf it is best to take the pulp of lamb without a stone. So, my meat and cut it across the fibers in small pieces (the size is slightly less than a matchbox). Solim it, pepper and put it in the brazier with hot butter, where we cook on high heat until the appearance of a crusty crust. Meanwhile, we clean the onions and carrots and finely shred them. When the meat blushes, add crushed vegetables and saffron to it, pour a little water or broth and continue to simmer until the lamb is ready. Cook the rice separately. To make it crumbly, it's best to take steamed croup. However, the usual rice can also be welded correctly. Fill it with cold water and the first broth must be drained, and the rice is washed and poured with a new portion of cold water. So you can do it a couple more times. Then rice you are guaranteed to get crumbly. Part of the cooked rice is colored with saffron. To do this, make a tincture from it: we make a tablespoon of melted butter with the same amount of boiling water and add a pinch of saffron (turmeric). Salt grits on your own. We serve Sabza-kaurma in a special way. White rice put the slide on a dish and sprinkle with yellow rice, drawing strips from it. You can simply mix the yellow rice with white. Side of the hill or around it lay out meat with vegetables. All water with melted butter and sprinkle with chopped herbs. 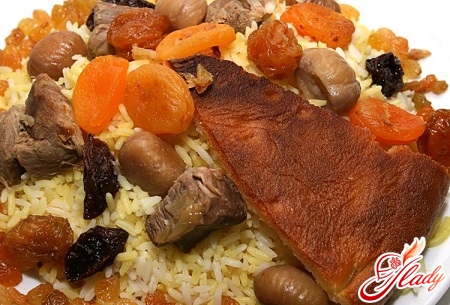 We offer you the recipe of the egg Azerbaijanipilava. It is cooked with a special onion-dogwood dressing-casserole, called gara. And the name shishryanch-pilau is translated as "a pilaf of six colors". Ingredients:

Preparation: Dogwood soaked, and then rub it in puree. Gently divide the eggs into yolks and squirrels so that the yolks remain intact. Beat the whites in a light foam. Now we warm up the brazier in the brazier and dissolve in it a couple more tablespoons of creamy. Finely chopped onion fry in a mixture of oil for about ten minutes, and then add the cousine smoothie and continue to fry another five minutes. Then we make the fire minimal and fill the onion-dogwood mass with whipped whites, spreading them with layers, but not mixing. After the squirrels grasp, we make a depression in the middle of the garage, pour the yolks into it and sprinkle with a mixture of spices. After three to four minutes, the yolks will be baked and the gara will be ready. Separately boil rice, salt it and fill it with melted butter. Now lay the rice on a wide dish, the diameter of which should be larger than the diameter of the frying pan in which the gara was prepared. At the top of the rice lay out the whole, carefully removing the casserole from the frying pan. 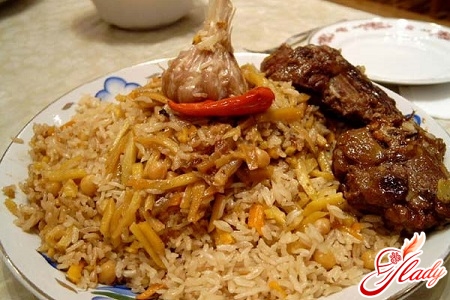 And this is a recipe for a very unusual milk pilaf. This recipe just means cooking kazmag. Ingredients:

Preparation: We put rice in a mixture of milk and water. While rice is brewed, we begin to prepare kazmag. Mix the sifted flour with sugar and salt, add the egg and, pouring water, knead the dough. Then add ghee and mix the kazmag to homogeneity. Lubricate the walls with oil and lined it with a thin layer of dough. Ready rice mixed with raisins and put into a cauldron, which is tightly closed with a lid. On a very slow fire we cook pilaf for about half an hour. After that, pour rice melted butter, mixed with turmeric. We serve, laying on a dish and adding slices of kazmag.

The recipe for a sweet fruit plov is known to many. But it is not known to everyone how to prepare it in accordance with the traditions of Azerbaijan. So, we offer you a recipe of the width-plov - a sweet dish of rice and fruit. Ingredients:

Preparation: Kazmag is preferably prepared in advance using a recipe for sweet and milk pilaf (that is, with sugar and cinnamon). Rice boil in slightly salted water until incomplete preparedness, rinse and turn it back to the colander. Lining a thin layer of dough dough, pour rice into it and pour a mixture of boiling water, melted butter and turmeric. Cover the cauldron with a lid and leave it on a very weak fire. Meanwhile, almonds are cleaned, dried apricots, peaches and cherry plum are cut into small pieces. Now we dissolve the brazier in the brazier and fry the fruit on it along with the almonds. Next we need to make a syrup. To do this, in the saucepan, we spread honey with sugar, and then add garnet juice there. Prepare the syrup for about five to seven minutes, after which you need to add spices to it and transfer the fruit to the sauté pan with syrup. We continue to boil the fruit syrup for another seven minutes. Serve the width of the pilaf in two ways: lay the rice with a slide, and top with syrup and put the fruit or serve rice and fruit with syrup separately, in two deep cups. 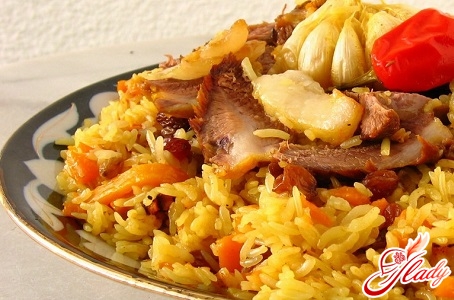 The recipe is designed for a large feast (ten to twelve servings). You'll have to cook it for an hour and a half. But you can surprise the guests with a real Azerbaijani plov with chicken. Ingredients:

Preparation: Rinse the rice several times until the water becomes clear. After that, soak it for half an hour. After the rice a little swells, boil it, lowering it into salted boiling water (one and a half liters), for seven minutes. During this time, the rice is cooked to the incomplete readiness, which is what we need. Then rinse the rice and throw it back in a colander. Now we do kazmag, mixing the flour with salt and adding an egg to it. Adding water, knead a steep, but soft dough, and then add the oil to it and mix it again to homogeneity. The dough is rolled into a thin flat cake and lined with cauldron (walls and bottom). Dissolve the butter and lightly oil the dough. Now we pour half of the rice into the cauldron and pour half the melted butter. On top, lay out the remaining rice and water it again with oil. Cook the rice in the lid covered with cauldron for about half an hour on a very slow fire. Meanwhile, peeled chestnuts boil for seven minutes and cool. Peeled onions shinky rather large, and dried fruit washed with warm water. Also squeeze the juice out of pomegranate seeds, and chop the chicken into small pieces. In the brazier, we dissolve two or three tablespoons of butter and fry the meat in it. The chicken should only brown, so cook it in small portions and fry for no longer than five minutes. We remove the meat from the frying pan, and fry the chopped onion for five minutes on the remaining oil. Again, we put meat in the brazier, add pomegranate juice and cover it with a lid, continue to simmer for about half an hour. After that, put the chestnuts and dried fruits, salt in the brazier and continue to cook all together for another ten minutes. We put the finished rice in two saucepans. One part of the rice is left white, and in the other we add saffron infusion (turmeric, a tablespoon of oil and a tablespoon of boiling water). Now take a large flat dish and lay out on it stripes of yellow and white rice. In the center of the dish we put chicken pieces, chestnuts and dried fruits. We serve toe-pilaf with torn to pieces of kazmag.

To cook pilaf in Azerbaijani is not so difficult. The main thing is not to make mistakes.

In general, the success of any dish is almost one hundredpercent depends on your mood. Therefore, if you are going to prepare an Azerbaijani pilaf, then cook with pleasure. Enjoy your appetite and success in the culinary field!

How to cook risotto with mushrooms or vegetables?