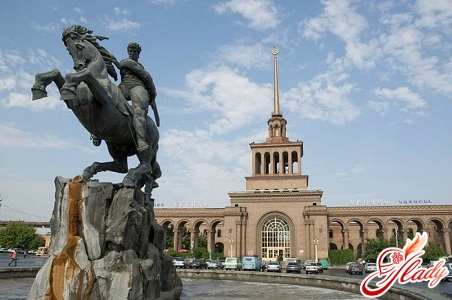 Armenia is one of the most ancient stateson Earth, this is the first state of Christians in history. As early as 9-10 centuries BC on the Armenian land there was a strong state of Urartu. And since then, all the historical epochs that swept over the Armenian land left their traces here. There is nothing strange in that the sights of Armenia cause genuine interest. The country has a huge number of historical and cultural monuments, in terms of the number of which Armenia is one of the most remarkable in the Old World. 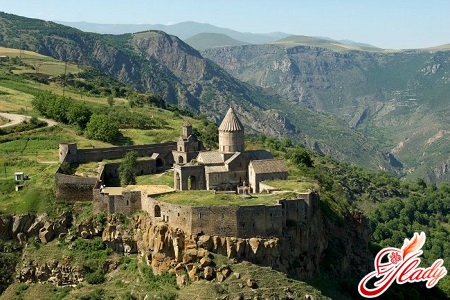 The main sights of Armenia arein the capital of the state - Yerevan, which is one of the most ancient cities on Earth. But many attractions are scattered throughout the Armenian land, and often in the most remote village you can find a monument that is the property of all mankind. The capital of the state is located in the middle reaches of the Hrazdan River, which is in the heart of the Ararat Valley. In the vicinity of Yerevan there is a large number of historical and cultural monuments and, of course, first of all it is necessary to visit the magnificent Echmiadzin, which occupies the main place in the cultural and historical heritage of the Armenian people. It is the center of the Armenian-Gregorian church, it is considered the "heart of Armenia" and the residence of the Catholicos. It is necessary to visit the ancient monastery of Kecharis with the churches of the Enlightener (it was built in 1033), the church of Surb Nshan (erected in the 11th century) and Katoghike (13th century) which are of no less interest than the center of the Armenian Gregorian church. In the 12th and 13th centuries, this ancient monastery was the spiritual center of the country. After visiting the sights of Yerevan, you need to travel 15 km east from the capital - there lies the impregnable ancient fortress Garni, which from 3 to 4 centuries AD was the summer residence of Armenian kings (at present this fortress has not only the largest historical and cultural significance , but also archaeological - here archaeological excavations are being intensively carried out, and not far from the fortress of Garni is one of the most ancient monuments of ancient times - the temple of the sun god Mithras, which was built in the 1st century AD . 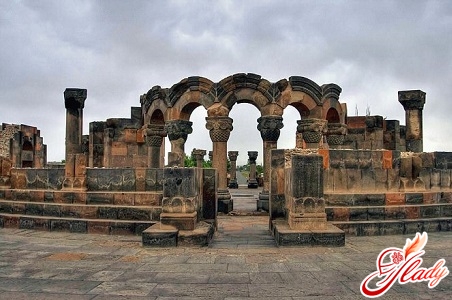 What can you see outside of Yerevan?

If you drive 7 km northeast of Garni, thenyou can visit the famous rock monastery Geghard (which means "spear"), which was erected in the 13th century. Visiting this monastery, you can contemplate the magnificent decoration of temples and cells, which with amazing art are decorated with bizarre bas-reliefs and ornaments. Here are the tombs of members of Armenian aristocratic families and many other masterpieces of underground architecture. All this deservedly brought the monastery of Geghard the glory of one of the most interesting monuments in the history of mankind. 30 km north-west of the capital of Armenia is the city of Ashtarak, which is rich in sights. Be sure to pay a visit to the church of Karmravor, which was erected in the 7th century. And on the southern slope of Mount Aragats, which is nearby, stands the ancient fortress Amberd (10-13 century). This fortress is the former family estate of Prince Pahlavuni - one of the most famous state and political figures of the Armenian state. It is necessary to visit the ancient churches of Karmravor, Ciranavor, the Church of St. Marina and St. Sarkis. The Surb Mesrop Mashtots church deserves attention, which is known for the fact that it houses the relics of the founder of the Armenian alphabet Mesrop Mashtots and Prince Vagan Amatuni. Of course, the extinct volcano Aragats, which is the highest point in Transcaucasia, is of great interest. 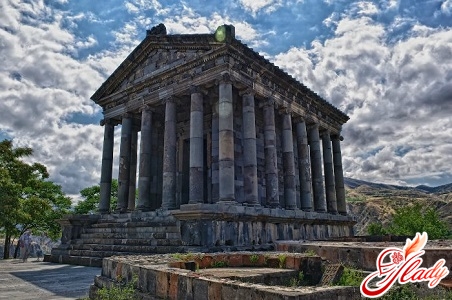 Attractions of Armenia cause a hugeinterest in a large number of tourists from different countries. You should definitely visit the ancient capital of Armenia Armavir, which is one of the most ancient cities of the country and is located on the banks of the Araks River. It was founded in the 8th century BC as a military fortress. And there, where the Metsamor River flows into the Araks River, the second ancient capital of the Armenian state Artashat stretches, which is called the "Armenian Carthage". It was founded in the 2nd century BC. Not so far is the medieval capital of the country, the city of Dvin, which from the 9th to the 14th century served as the state. These cities were almost destroyed to the ground as a result of numerous wars, but thanks to the efforts of archaeologists these ancient settlements gradually reveal their secrets to us. Everyone can see excavations of palaces, estates, citadels that witnessed the birth of civilization. Tourists must visit Gyumri, which was the capital of Shirak Ashkhar, this city is one of the oldest in Armenia. At one time it was almost completely destroyed by an earthquake, but its excavations arouse genuine interest. In the vicinity of this ancient city there are still beautiful landscapes, many ancient temples and monasteries have survived very well. Few will be indifferent after visiting the ruins of the ancient fortress of Gyumri, the monastic complex of Arichavank. The cathedral in the former capital of the Bagratid dynasty - Ani, which was built in the 11th century, the famous Arich monastery, which was the summer residence of the Armenian Catholicos in the 7th century, causes admiration. 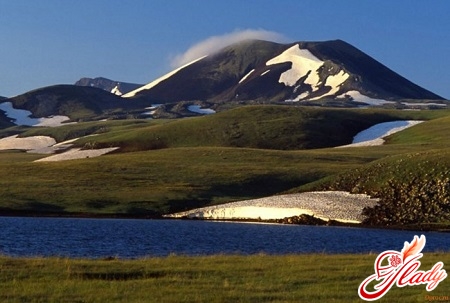 Tourists who visited Armenia, mustto visit the south-east of the country, namely Zangezur and Vayotsdzor, which amaze with its harsh beauty and stunning mountain landscapes. The main attractions of the area are highlands, mountain valleys, stormy rivers, narrow mountain gorges, alpine pastures, small mountain lakes and original settlements that are literally stuck to the slope of the mountains. The inhabitants of these mountains are proud, freedom-loving and very hospitable people who for centuries have successfully resisted foreign invaders. Lovers of the sweet must be offered to try the amazing honey, since it is in this area that the best honey in the country is made, which is famous far beyond its borders. The most picturesque landscapes of Transcaucasia are spread here. Lovers of history need to visit the Shatinvkank monastery, which was erected in the 10th century, one of the oldest Zangezur churches of Sisivan (7th century). Unconditional interest is caused by the ancient bridge in Vayodzor, Noravank monastery complex, in which is the burial vault of one of the most noble families of Armenia, Orbelian. It is necessary to visit the ruins of the Museum of Gladzor University, which during the Middle Ages was one of the largest centers of education, and now it is almost destroyed. And what are the picturesque cave settlements of Bartsravane, Shinuayre, Keres, and the famous Armenian resort of Jermuk with healing mineral warm waters can not be ignored. No one will be left indifferent by the reserved plane tree grove that lies in the gorge of the Tsav River. 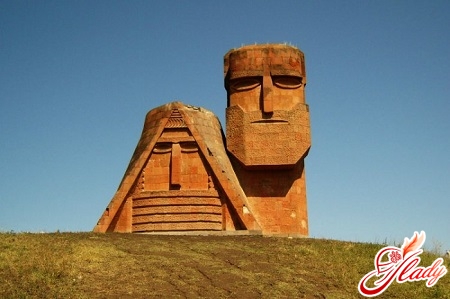 Other attractions of the country

In all regions of Armenia there are thousandsunique historical monuments, many of which are many centuries old. Here it is necessary to mention the monastery of Hadavank-Hathravank, the ancient church of Surb Stepanos, which is in Toha. And still it will be very interesting to visit the desert of Koshik, which is known for its amazingly beautiful khachkars, which fully demonstrates the remarkable craftsmanship of the ancient folk craftsmen and their inexhaustible imagination. Hachkrom is the Armenian cross, which is one of the most important symbols of the country. Stone crosses are scattered all over the country, which are eloquent evidence of how many sufferings for many centuries this small, proud and freedom-loving people had to endure. It is noteworthy that each khachkar is made in an artistic manner peculiar to him only, so it is almost impossible to find completely identical crosses. In this regard, the Armenian khachkar is a self-sufficient monument in history, it is always connected with some event. If you are interested in the sights of this country, you can not ignore the numerous ancient monuments of Nagorno-Karabakh. Since December 1991, it is an independent republic under the patronage of Armenia, and visiting it does not cause any problems. It is best to go to Nagorno-Karabakh from Stepanakert, there is a regular bus service here. In order to inspect all the sights of Nagorno-Karabakh, you need to take a taxi or use a car. They will not leave anyone indifferent.

If the vacation fell in the winter, where to go?