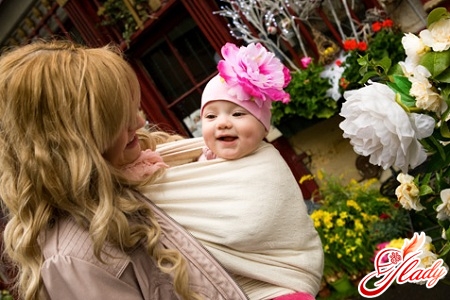 Fashionable, comfortable and useful slings - not newinvention, but only improved models of primordially popular adaptations - the lanyards for carrying children. Such flaps-cradles were almost all the peoples of the world. Judge for yourself. In Russia, children were worn in aprons or in the hem of a long skirt (hence the expression "to bring in the hem"), the gypsies adapted for this their immense shawls, Japanese and Chinese women, the aborigines of South America and Africa carried the children in scarves, scarves, towels. In short, they used any suitable for their size and quality fabrics. By the way, folk "models" of bandages served as the basis for modern varieties of sling. And given that our predecessors did not have any special tools except needles and thread, we can assume that it is quite possible to make sling by each of us. Well, if we are such clever women and needlewomen, then we have nothing left to do but sew the sling with our own hands. And for a basis we will take the national models of flap-cradles.

Whose traditions formed the basis of modernmodel sling-scarf, now you can not say. In Belarus, towels (long rectangular towels) were used as carryers, gypsies wore children in shawls and long wide scarves (duchlo), and the Mexican scarf of the rebozo can be considered a prototype of this kind of sling. In short, the model is multinational. And in order to sew such a sling with our own hands we will need:

Immediately let's specify the nuances of choosing the fabric forsling-scarf. The fabric, which extends strongly, is suitable only for a newborn baby. Kids older is better to sew slings from a completely non-stretchable fabric, or from one that stretches only slightly. Density of the fabric should be evaluated by its ability to tie in a strong knot - it's how you will fasten the sling-scarf. Ideally, the sling should be tied to one node, but it can be two, but not too bulky. Try to choose natural fabrics - cotton, linen and wool, and if the fabric stretches, then make sure that it stretches evenly along the share and cross threads. So, we cut out a flap from which we will make a sling. The width of the flap depends on the elasticity of the tissue: for stretching fabrics it will be from forty-five to fifty-five centimeters, for a less elastic fabric - from sixty to seventy centimeters. The length of the future sling is determined by the size of the mommy: women up to the forty-fourth size of clothing will fit a sling length of four to four and a half meters, larger mummies will be needed to sling from four and a half to five and a half meters of fabric. The shape of the pattern can be strictly rectangular, with rounded, bevelled or tapered ends. The shape of the ends plays a rather aesthetic role and has no fundamental differences. Cut out the flap, process the edges of the future sling, tucking them along the entire length and width of the pattern and stitching it on the typewriter. You can also process the edges on the overlock, but this method is less practical, since the sliced ​​edge of the sling can cling to clothing, a bag or jewelry. For fabrics that do not require treatment at first glance, it is better not to skip this step: the tucked edge will make the sling more durable and pleasant to use. And in the end, you can sew on a sling-scarf pocket or just a bright label, so it was easier to find the middle of the sling. Important! Try to use a one-piece cloth flap for a sling-scarf. The transverse seam on such a sling will push the baby or mommy on the shoulders back. 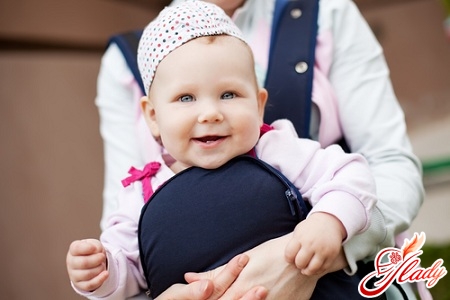 Knowing how to sew a sling scarf, you can trymake and its improved version. We will sew two-sided sling with rings. This model is convenient, above all, in that it can be worn under both winter clothes and on it. And even in this sling it is convenient to carry the child in any position, and it is suitable for mothers of different complexions. So, how to sew sling with rings? For him we will need:

We choose a fabric not strongly stretched, yes so,so that if it stretches, it is only in width, but not in the length of the sling. For this model is not suitable for a thick denim fabric, corduroy, double-sided fleece. By the way, choose any fabric only two-sided, as the sling will have a loose fluffy "tail". And do not forget that the sling is not only a convenient device, but also the subject of your outfit. So think about the harmonious combination of fabric for sling with your wardrobe and style. So, take a cloth flap (from 2 to 2.4 m) and process all the edges (in the gate or on the overlock). One edge of the flap is threaded into two rings, wrapped so that the rings are on the edge of the sling, and we attach the wrapped edge to the main canvas. For this, we make three straight or zigzag lines along a semicircular line. Strictly speaking, the sling with rings is ready. It remains only to try it on, and to think how it's more interesting to lay the folds of the free end. ABOUT! This model went to us from industrious Chinese women who invented a sling that makes it convenient and safe to carry a child and completely freed the mother's arms. A more complex version of the sling than the two previous models, but also more convenient. Such a sling is more like an apron with long straps in the lower corners. When a child is put in it, then raise the "apron" upward, and the straps are crossed behind the mother's back and fixed in front. How to sew May sling with your own hands? For sling size 35 by 45 centimeters with two-meter upper straps of 9 centimeters wide and a waist strap 8 by 160 centimeters, prepare:

First of the main cloth we cut out 2 parts48 by 38 centimeters plus one and a half centimeters on each side for allowances for seams. Then cut out the two upper straps measuring 21 centimeters per ten meters (plus allowances) and a waist strap with a width of 19 by 163 centimeters (plus allowances). From the sintepon we cut out two inserts of 8 by 140 centimeters. Now we begin sewing the May-sling itself. Fold the detail of the waist strap in half along the length of the pattern and sew the folded edges together. The resulting pipe is turned out and ironed. The same is done with the upper straps. Then insert the sintepon into the upper straps of the sling, aligning its edges with the ends of the straps, and sew it with several lines at a distance of 15 centimeters. Unprocessed edges of straps are tightened and we spread. The edge with the sintepon is left open. We add the details of the sling with the faces and between them we insert straps (in the upper corners) so that they intersect in the center with the ends of the sintepon. We fasten all the details with pins and we spend the sling along the edge: we start the line from the middle of one side, we move upwards, along the upper side and go down to the middle of the second side. We take out the pins, turn them out, iron them. Now adjust the location of the top straps and chop them with pins. We fasten the pins and the waist strap, which runs along the bottom of the sling. The lower edges of the back are pivoted under the waist strap and we spend all the sling around the perimeter. The last line is laid in seven centimeters from the bottom of the sling, grabbing the edge of the waist strap. In the places of attachment of the straps, we make several additional lines. That's all! Man-made sling is ready! Do not give up the experience of our predecessors. If they used a bandage to carry a baby, then it's really convenient! And notice: they could not buy a ready-made device: everything only with their own hands. And what we are worse? So choose a model, prepare a suitable fabric, sew a sling and use this ancient invention for joy and health! We advise you to read:

How to make natural cosmetics yourself?

We make hearts with our own hands from the bottom of our hearts!

How to make a candle at home?

Flower brooch with own hands

Patchwork without a needle