The art of make-up is a science thatmankind has been learning from ancient times. After all, cosmetics, with the help of which people decorate their appearance, appeared in time immemorial. Of course, then it had several other functions, but it was still used almost everywhere. Many ancient tribes before important holidays and religious rituals painted their faces. Even then, to study the art of make-up was an honor, this function was entrusted to the most respected and responsible members of society. It was not too long, and make-up began to serve as a symbol of beauty and attractiveness. At all times, women wanted to like men, and cosmetics helped them both to emphasize the dignity of their appearance, and to hide their shortcomings. Perfecting in the art of make-up, any girl - a beauty and not very - could completely change. Apply makeup so as to emphasize the natural beauty of your face, and not to push away the inappropriate "war paint" - the whole science that women learn from almost the beginning of time.

History of cosmetics. A fascinating journey to the past

The word "cosmet" is of Greek origin, intranslation into Russian it means "the art of decorating." And indeed, it adorns! Even in the days of Ancient Greece, cosmic people worked (which was the original name for their profession), who used various cosmetics to eliminate shortcomings in the appearance of women. These ancient specialists, the "progenitors" of modern makeup artists, impose a special make-up, masking problem areas and transforming the appearance of the fair sex. Cosmet also prescribed to his clients special creams to maintain youth, conducted various rejuvenating procedures. Unfortunately, it is rather difficult to accurately name the motherland of cosmetics. During numerous archaeological and ethnographic studies it became known that in Ancient Egypt cosmetics existed already two thousand years before the birth of Christ. The Egyptians then practically universally used various cosmetics, in every possible way transforming their appearance: they blushed cheeks, painted lips, applied aromatic oils on the body to smell pleasantly. Residents of Ancient Egypt believed that a woman left unpainted on the street - the top of indecency, so all the representatives of the beautiful half of humanity every morning started with applying on the face of makeup. The art of make-up was taught literally from childhood, and men of noble family also did not neglect cosmetics. Particular attention was paid to the eyes: a very thick black liquid with the help of a special thin stick was outlined by the contour of the eyes, and a special powder of green color (carbonic copper) was applied to the eyelids. As a tonal means, the Egyptians used ocher red or yellow flowers. But the Middle Ages nearly stopped the development of the art of make-up: while painting on the face was considered akin to sorcery and severely punished by the Holy Inquisition. And only in the sixteenth century of our era women again got access to favorite cosmetics. However, only girls from poor families could make make-up themselves, noblemen invited artists for these purposes: make-up was considered a very serious and laborious business. Then came the era of Louis XVI with his love for wigs, flies and an abundance of blush. At that time, makeup was considered literate, if it was so bright that its owner could be seen from afar. And due to the fact that it was not accepted to wash then (the rules of decency allowed to take a bath not more than two or three times a year), then the paint on the face and body stayed well, very long! And only the French bourgeois revolution fundamentally changed the notion of the art of make-up in Europe. In place of the screaming, sometimes ridiculous coloring came the fashion for simplicity, naturalness and elegance. It is these criteria that are closest to modern trends in fashion, this style is urged to follow the women all current stylists and make-up artists. The art of make-up in our days

Today it is difficult to find at least one woman, norI do not use cosmetics. Like hundreds of years ago, we learn to paint lips and cilia almost from infancy, and a woman in old age with carefully applied makeup is by no means a rarity in our time. And if more recently, instead of powder, young women used white, and instead of eyeliner - antimony, then the cosmetic industry of our time has moved far ahead. Now women have a lot of various and absolutely safe means for decorating the face and body. The art of make-up is not only an impeccable taste, but also a skillful, competent performance. After all, do not put enough make-up on - and the desired effect will not, impose an extra - the effect will be, but not the most pleasant. What admired at the court of Louis - a kilogram of makeup on his face - will cause bewilderment and dislike today. There are whole academies of make-up and style, where thousands of specialists in the field of beauty are trained. Annually there are festivals and master classes of make-up artists, there are even special awards "Visagist of the Year", "Professional Awards", etc., where the best professionals compete in art to make a woman irresistible. But it is not necessary to be a professional make-up artist to be able to use cosmetics. It is enough to know a few golden rules for applying makeup in order to look well-groomed, beautiful and fresh. Each person individually, and, when starting to learn, you need to consider such "little things" as the complexion, its shape, skin type and so on. And the best will be exactly that make-up, which on the face is practically invisible, and this is with a clear transformation of appearance for the better. 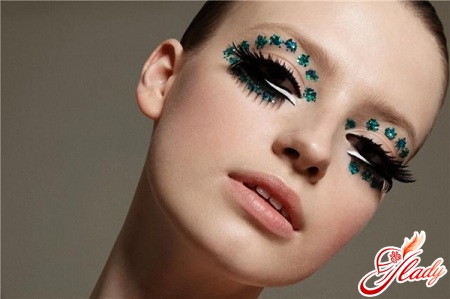 In order to master the artmakeup, do not necessarily have a whole arsenal of expensive jars and tubes with the contents of all the colors of the rainbow. Quite a few well-chosen colors of cosmetics that will create an ideal image for you. The right choice of cosmetics is half the success in mastering the art of make-up. The ability to use it - the second half. The tonal means and powder The tonal means and powder are queens of a modern make-up. They can "take away" a few years of their owner, smooth out the signs of fatigue, disguise the unpleasant pimples and even the skin tone. Any girl, skillfully using these tools, is able to instantly change and shine with beauty and health. Unfortunately, the same miracle tools in inept hands can lead simply to a catastrophe: smeared yellow spots on the face, mask effect. In order to avoid such troubles, remember the following rules:

Blush Blush just have to be in a cosmetic bagany self-respecting woman! After all, with the help of blush, make-up looks finished, and the face - fresh and flowering. The only hitch is that many girls too literally understand the word "blooming" and apply blush too much, forgetting the lines of cheekbones on their face. So, the basic rules for choosing and applying blush:

Mascara Mascara - reala wand-a rescue tool for almost every modern woman. It is enough to wave a couple of times with a brush along the cilia, and the eyes become more expressive, sexier. But the result will be a hundred times more attractive if you follow absolutely all the rules for applying mascara:

Lipstick And what kind of make-up will do without thisthe final chord: applying lipstick? After all, with her help you can radically change the face - make it expressive and beautiful. There is a classic way of applying lipstick:

In addition to the basic rules of applying lipstick,there are little tricks that any girl should know. For example, light colors of lipstick visually increase the lips. Well, those girls that dream of an additional volume for the lips, you can advise using a contour pencil: apply it on the skin, slightly deviating from the natural line of the lips. However, do not forget the golden rule: the deviation should not exceed one or two millimeters, otherwise you will look stupid and slovenly. If you have thick lips, then you'd better forget about the contour pencil, do not traverse their lips. In order to solve the problem, leave the corners of the lips unpainted - so you visually make the lips thinner. But if you want to lift the lowered corners of the lips, then use the following cunning: the lower lip is painted, not reaching the corners, and the contour is lifted slightly upwards. And finally, a couple of curious facts: if the lower lip is thicker than the upper one, it will slightly hide the excessively wide nose or rounded face. And on the contrary, a more densely painted upper lip will allow the narrow face to appear more round. This is a brief overview of the basic cosmetics that every modern woman should be able to use competently. Wherever we live and how old we are, but the love of cosmetics, the passion for applying makeup in our blood. Probably, there is no such woman in the world who would not be attracted by hundreds of colorful bottles and tubes on the shelves in beauty parlors. We are ready to spend hours looking at the means for make-up, dreaming to apply all the newest, most expensive and deliciously smelling "tricks". But the final result - the perfect make-up - depends not so much on the opportunity to buy all the best and dearest, as much from the sense of taste and knowledge of the foundations of competent make-up. Try, experiment, maybe you will find your own style, not like the images surrounding you. Indeed, more recently the thesis that blondes are exclusively pink tones of lipstick and brown ink, was considered an axiom. And the famous Marilyn Monroe took and violated all the rules, admiring the fans with her lips with a bright red lipstick and long eyelashes covered with black mascara. Knowing the main rules of makeup, try to push away from them and find something new, unique only to you. Perhaps, it is this find that will make you unique and unique, unlike others, but so attractive. The art of makeup for many hundreds of years, throughout the history of mankind, the tastes and perceptions of female beauty have changed many times. And like any art, make-up does not have rigid boundaries and rules, but there is a possibility of searching for interesting individual solutions. We advise you to read:

Wedding make-up for green eyes: a festive image for the bride

Evening make-up: do it yourself

How to apply makeup?

Makeup for deep-set eyes in stages