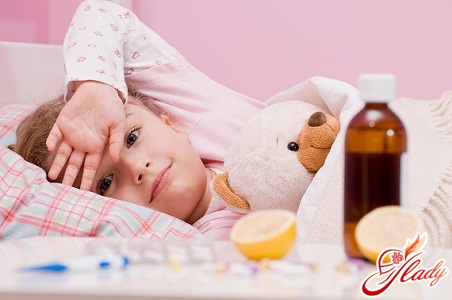 Winter and spring are the time when children get sickacute viral respiratory diseases. And, of course, in order to avoid the complications that a viral infection can cause, treatment of the disease should be started as soon as possible. Of course, at the first signs of the disease, parents should call a pediatrician at home as soon as possible and purchase antiviral drugs for children. And it's no accident - it is the first day after the disease is the determining in the further course of the disease. If the baby's malaise is noticed immediately, and immediately begins to treat it - the chances that the disease will end, so really without even beginning, are very, very high. Or, in extreme cases, the disease will proceed much easier than without treatment - and last not so long, and the temperature may be small, if not completely absent. Agree, the pros of the timely begun treatment is obvious. However, unfortunately, not always the doctor comes in the first hours of the disease. And the reasons for this may be a lot - the child fell ill in the evening or at night, or during the seasonal epidemic of acute respiratory viral infection or influenza, the doctor may not have time to examine the child in the first hours after the disease. And in such cases it is permissible to start the treatment of the child on its own, in order not to miss the precious time and prevent the child from getting completely sick. But in order to do this, you need to know exactly what antiviral drugs are for children, and how they differ from antibacterial drugs. Otherwise, with improperly selected medications, the child's condition can only worsen.

As is known, antibacterial drugs withvirus diseases are simply ineffective, since they have no effect on viruses. Yes, and prescribe antibiotics can appoint only a doctor. And with viral infections, treatment should be made precisely with antiviral drugs that very quickly suppress the vital functions of certain viruses, leading them to death and, consequently, to the improvement of the child's condition. By the way, antiviral drugs have one more interesting feature - the earlier treatment is started, the faster the viruses die. And it's not surprising - at the beginning of the disease, they still do not have time to multiply in a very large amount, and it is much easier for the drug to remove them. Also, do not forget that the treatment of a viral disease should be complex, It includes three stages:

The first two stages of treatment are detoxification andsymptomatic, also in no case can not be ignored. Detoxification treatment is necessary in order to eliminate the intoxication of the body, which worsens the child's well-being and complicates the course of the disease. Symptomatic same treatment allows you to relieve the crumb of the symptoms of the disease - cough, cold, sore throat and temperature. For the treatment of viral diseases in our time, homeopathic antiviral drugs for children are widely used. Until recently, doctors treated homeopathy very distrustfully, believing that these drugs are completely ineffective. However, numerous studies have shown that homeopathic remedies are no worse than chemicals that cope with viruses. Almost all such drugs can stop the development of the disease at its very beginning. The most widespread are such drugs as "aflubin", "ocilococcinum" and candles "vibrukol". These drugs very effectively suppress all processes of vital activity of viruses, bringing relief already in the first hours after the onset of the disease. However, pay attention to one nuance - be sure to give your child as much fluids as possible. This is necessary in order to prevent the intoxication of the child's body. Another group of effective antiviral drugs are interferons. For example, doctors prefer to prescribe to the child rectal suppositories "viferon" at the very beginning of the disease. This drug not only successfully fights with various viruses, but also greatly increases the work of the immune system of the child. By the way, thanks to this property, "viferon" is very beneficial not only in viral, but also in bacterial diseases. However, in the event that the causative agent of the disease is a bacterial infection, in addition to "viferon" it is necessary to carry out treatment with antibacterial drugs. The third group of antiviral drugs is chemical. These drugs have a much stronger impact, not only on viruses, but also on the child's body. Therefore, such drugs can prescribe only a pediatrician, taking into account the characteristics of the general condition of the child. Most often pediatricians prefer to prescribe a domestic drug "arbidol". The effect of this drug is based on stimulation of the body's production of its own antiviral protein interferon, which, in turn, has a harmful effect on viruses. If it is antiviral drugs for children from 1 year old, the doctor can prescribe remantadine. As a rule, for children, a syrup called "Orvir" is prescribed. This drug effectively prevents the penetration of viruses into the baby's cells. However, note that this drug is effective only in the first day after the onset of the disease. In the future, its effectiveness is reduced at times. In addition, this antiviral drug for children very effectively removes intoxication of the body. We advise you to read:

The child under the eyes has bruises

Inflammation of lymph nodes in children