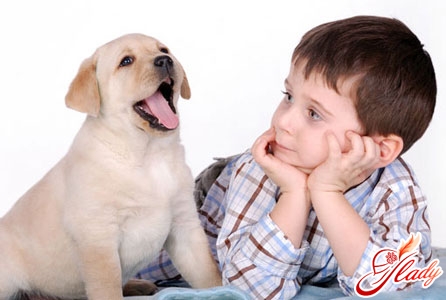 Child psychologists believe that pets- whether it be a dog or a cat, a parakeet or a fish, a turtle, a hamster, have a beneficial effect on the educational process. The child learns to take care of a weaker and defenseless being, in addition, playing with a pet is the best way to influence the psyche of children. Unfortunately, in recent years, such an unpleasant phenomenon as an allergy to animals in children has become more common. Allergies can have different types of manifestation, so you can be confused with some other disease. Parents should closely monitor the state of the child. The main symptoms of animal allergy in children are:

At reception at the allergist

If a child has one or more suchsymptoms, it is necessary as soon as possible to seek advice from an allergist. The doctor will prescribe certain methods of diagnosis, through which you can identify the allergen that caused allergies. After all, the allergy may be not on the animal, but on some other stimulus. Below is a description of the main types of diagnosis of various allergic reactions.

The study is most often carried out on the skinforearm. Shallow scratches or punctures (depth no more than 1mm) are made on the skin treated with alcohol, and then a drop of allergen is applied to the damaged skin (no more than 15 samples at a time). If, after some time, a small edema or redness develops on the site of the test, it is suggested that the allergen is the allergy.

To carry out this analysis, it is necessary to donate blood from the vein. The information obtained is inherently similar to that obtained as a result of skin testing.

Such a study is carried out only inallergological hospitals on strict indications - in cases where skin tests or a blood test did not give a clear picture. In this test, a small amount of allergen is injected into the nose, under the tongue, or directly into the patient's bronchi, and the subsequent reaction is evaluated. Such a study is dangerous because it can cause a very strong allergic reaction in the patient, so it is conducted in the presence of a doctor who can provide emergency medical care.

Elimination is the removal of the allergen. This is a diagnostic technique in which contact with the suspected allergen is excluded. A vivid example of an elimination test is an elimination diet for food allergies. From the diet of the patient, the alleged allergenic product is completely removed. If after 7-14 days after exclusion of the product there is an obvious improvement in the condition, then we can confidently say that it was this product that caused allergy.

Of course, these methods give only a partinformation about the disease. The doctor will be able to make a more accurate diagnosis with the totality of the results of the tests, the questioning, the examination and the response to the treatment. One of the most common allergies is allergy to animals in children. Allergic activity is possessed by wool, saliva, dandruff, feathers, urine and excrement of our smaller brothers. However, even this type of allergy has its differences. The most common manifestations of allergy to cats in children take the form of an allergic rhinitis (rhinitis) and conjunctivitis, sometimes even bronchial asthma. And then you need to take action. First of all, it is necessary to minimize direct contact with the animal. The pet will need to be combed more often, and washed at least once a week. To reduce the content of skin and wool particles in the room, it is necessary to remove carpets and all objects that accumulate dust. Treatment of allergic manifestations is prescribed by a doctor. When conjunctivitis, which is the most frequent sign that an allergy to dogs has arisen, children can be prescribed cold compresses and "artificial tears" to reduce discomfort. If this is not enough, the doctor can prescribe anti-inflammatory and antiallergic drugs in drops or tablets. In allergic rhinitis, anti-inflammatory and anti-allergenic agents are also used. In addition, a very successful method of treatment is used - specific immunotherapy with allergens. The essence of this method is that an increasingly concentrated solution of the allergen is injected into the patient's skin for several weeks. So the organism gradually "learns" to develop something like an antidote for a given allergen.

Is bronchial asthma a verdict? 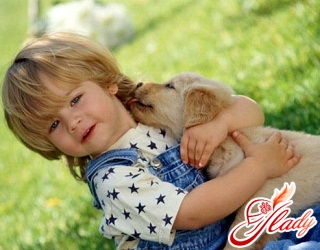 Bronchial asthma is a more serious disease,requiring daily treatment. Treatment should be under constant medical supervision. In the treatment of asthma, there are several groups of drugs, among which there are two groups - symptomatic and basic. The action of symptomatic drugs is aimed at restoring bronchial patency and removing bronchospasm. This includes the so-called "first aid" preparations for rapid withdrawal of suffocation. Such drugs are only used when necessary. Basically, drugs aimed at suppressing the inflammatory process in the bronchi, on the contrary, do not have an immediate effect and are used for a long time, since inflammation in the bronchi with bronchial asthma is chronic. We should not forget about non-medicinal methods of treatment of bronchial asthma, which, together with medications, lead to the best results. These include:

How to reduce allergy manifestations?

And yet, for the sake of justice, I must say, at leastdoctors in the voice advise to avoid contact with animals, a child suffering from allergies, but it is not so necessary to do so. After all, this would have to deprive him of the joy of communicating with his beloved friend, and this can cause him great mental trauma. So what should you do if you are faced with the manifestation of animal allergy in children, but can not imagine life without a furry (feathered, scaly, etc.) family member? The most common pets in families with children are cats and dogs. Surprisingly, families in which one or more dogs are kept do not often experience such a phenomenon as an allergy to dogs in children. On the contrary, children in such families suffer from respiratory diseases much less often than their peers. And the solution lies in the high content of endotoxins - natural pathogens - in the apartment, which leads to constant stimulation of the immune system, and this, in turn, leads to a decrease in the manifestation of allergy to dogs in children. If, however, the allergy to dogs in children still appeared, then the dog should begin to wash with a special shampoo and revise the diet of the animal. After all, in a healthy animal with the correct metabolism, the presence of allergens in secret is minimal. With cats, everything is much more complicated. These four-legged pets are the distributors of the most powerful and aggressive allergens, which, thanks to the mobility of these animals, are carried throughout the residence. Therefore, allergies to cats in children are much more common. Moreover, allergies to cats in children are more severe than allergies to other animals. And prevention measures have less effect. If you remove the cat from the room, even after careful cleaning will take at least three to four months, before the number of allergens will drop to a level that is safe for health. Now many special products are being sold for washing cats, with the help of which the number of dangerous allergens on the animal's fur is reduced. But these funds give an effect only if the manifestations of allergy to cats in children are not too strong. There is another way to avoid allergies to cats in children - castration of an animal. After castration, the animal's body produces far fewer allergens. So, if, after analyzing all the pros and cons, you still decide to take in the house or already raise a furry pet, but at the same time want to reduce the risk of allergies to animals in your children, then you need to observe the following rules:

Fulfilling these simple requirements, you significantlyreduce the risk of allergies to animals in children and other household members. You can not deprive your children of the joy of communicating with their faithful four-legged friends, because every child at all times dreamed of having a fun and devoted friend! We advise you to read:

Acne on the face of a newborn: reasons for the appearance