The history of brandy Talk about brandy - the caseungrateful. He, born of the pragmatism of medieval merchants, is very easy to love - for the strength of his spirit and refinement of taste. And he more than anyone deserves love. In principle, Victor Hugo said everything about cognac, calling it “the elixir of the gods”. Hence the feeling that cognac has always been, with the creation of the world. It arose for purely economic reasons. With the flourishing of international trade, sea travel to the distant shores of Asia became so long that the main export value of France — wine simply could not stand them. Then the merchants invented to drive the wine through high temperature. So the world knew the “burnt wine” brandewijn, and simply “brandy”. But classic cognac is produced by double distillation. The history of re-distillation is like a legend. A native of Bordeaux, the chevalier de la Croix-Marone has long been engaged in the distillation of wine in the province of Charente. Once in a dream, he saw the hellish torments: like the devil thirsting for his soul, he threw him twice into the boiling cauldron. Waking up from a nightmare, Chevalier decided to do the same with wine. And if the devil was trying to take away the soul, then Croix-Marone gave cognac soul. Production he founded in the very town of Cognac, which gave the name and drink, and the whole region. Since then, the production of brandy has become a strict rule, protected by tradition and the state. Careful attitude to traditions is a matter of honor of a true brandy producer. This is the Courvoisier House, which appeared at the beginning of the XIX century. According to legend, Napoleon, going to Saint Helena, took on a side of Northberland several barrels of this cognac. Since then, Courvoisier Cognac House has been making brandy worthy of the imperial table. It is produced mainly from Ugni Blanc grapes, harvested exclusively in four provinces - Grand Champagne, Petite Champagne, Borderies and Feng Bois. The resulting wine is distilled using the Charenta distillery, which has not changed since its invention in the XVII, cognac is aged only in oak barrels. Each year, Courvoisier House Blending Master carefully selects oak trunks that will be used to make barrels. From this it becomes clear why good cognac, such as, for example, Courvoisier, is so difficult to find a culinary frame and is traditionally taken as a digestif. We are afraid to spoil the unique taste of cognac and because of this we refuse to experiment with the combination of cognac with food. The most daring use of cognac is flambé, a weathered degree, but retaining its aroma. But this method is too rough for a long-term brandy. It is a mistake to consider brandy exclusively digestive. In an attempt to disprove traditional ideas about the compatibility of cognac, as an expert, we turned to Glen Ballis, the head chef of the Nedalniy Vostok restaurant of the chain of restaurants Arkady Novikov, for advice. Glen took courage and came up with a special "cognac" menu that emphasizes the dignity of the Courvoisier XO Imperial. Glen suggested the following dishes as the most suitable for the Courvoisier XO Imperial Cognac: tuna-toro with scallop ceviche with shrimp, young barramundi fillet with squid and cole slow, red emperor fillet with citrus puree. The dishes offered to them subtly complement and emphasize the taste of the Courvoisier XO Imperial, and the refinement of serving and the way of serving the dishes create a single holistic picture of colors, tastes and smells. In other words, experiment, look for new combinations and enjoy! And the Courvoisier House brandies - whether you choose the Courvoisier XO Imperial, Courvoisier VS or, for example, the Courvoisier VSOP - will help you create coziness, comfort in any setting, give peace to body and soul and make you feel beautiful. 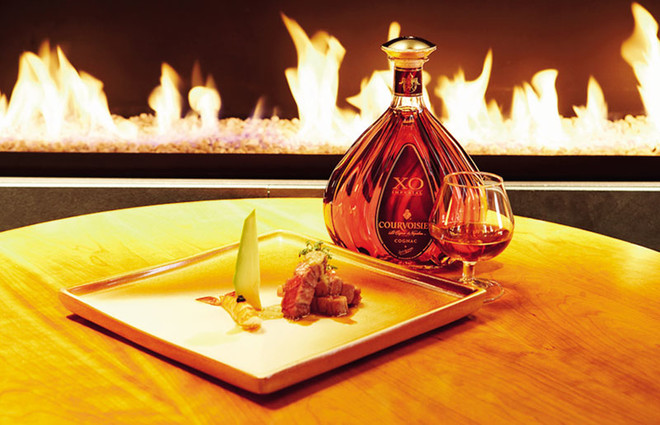 Who is she - Noble Blue Mold?

Weeks of Italy: tastings in Moscow

What can I cook for breakfast for a sweet tooth?

A simple recipe for slimming tea